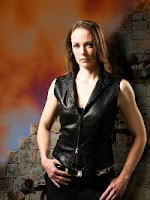 The Long and the Short of It is very pleased to welcome Jessica Andersen, bestselling RITA and RT nominated author of more than twenty Harlequin Intrigues and the new Nightkeeper novels, a hot paranormal series dealing with the 2012 doomsday.

When she was growing up, she wanted to be…everything. She laughed and told me, "My interests are many and varied, and I often think ‘in another lifetime, I would’ve been… (a genetic counselor, an FBI agent, a CSI, a patent lawyer, an archaeologist, a marine biologist, a veterinarian, a painter, a sniper, an equestrian, a world-traveler, a house flipper, and the list goes on).’ I think that’s why writing wound up being the perfect fit for me—For a few months or years, I can immerse myself in the life of someone who works in one of my dream careers or has one of my dream hobbies."

Jessica has just finished a novella that she's very excited about. It will be out next February in an anthology with Gena Showalter, Shannon K. Butcher, and Deirdre Knight. The four stories are about slayers of paranormal beasties.

"I had a fabulous time doing my take on Mayan vampire hunters," she told me. "The thing that made the story particularly cool is that it's tied to the Nightkeepers' world, but begins outside the main storyline. In fact, it involves an escaped Nightkeeper servant who wants nothing to do with the old hierarchy, but finds himself drawn back into the 2012 war when he falls for a pretty archaeologist with secrets of her own. It was an interesting experience, looking at the Nightkeepers through the eyes of someone who sees them as a sort of enemy. Not to mention that I’m looking forward to putting these two into the main storyline and watching them rock the boat!"

"Tell us a little big about your latest release," I said.

Gladly! First, a bit about the series:

Mayan lore and modern science warn that 12/21/2012 could bring a global cataclysm … a threat that is far more real than we imagine. Dark forces stand poised to overrun the earth and crush humanity beneath a vicious rule of terror and blood sacrifice. Our only hope rests with a group of saviors living in secret among us: modern magic-wielding warriors called the Nightkeepers.

Now, in the last few years before the 2012 doomsday, these magi must find and win their destined mates in order to protect the barrier of psi energy that forms humanity’s last line of defense against an ancient and powerful enemy.

Lucius is an Indiana Jones wannabe who never quite measures up, until a twist of magic brings him powers beyond belief … and reunites him with Jade, the one-night stand he never forgot. Despite the sizzling chemistry between them—and the added power that comes with a love match—Jade is determined to prove that she’s more than a researcher … she can be a Nightkeeper warrior in her own right. But as the two race to rescue the sun god himself from the underworld, they learn that kicking ass isn’t enough. They’ll need all their brains and skill—and the long-denied love that burns between them—to foil the dark lords’ plot.

Jessica describes herself as a very practical, fairly unsentimental tomboy who refuses to admit that she might have cried during a movie because she's afraid it will ruin her "tough guy" image. And, she told me it causes a great deal of amusement to people who know her when they find out that her writing space is pink.

"And we’re not talking subtle dusty rose, here," she said." The walls and carpet are two different shades of screaming Pepto Bismol, flamingo-loving pink. We’ve been in this house for more than eight years now, and we recently repainted the rest of the downstairs, so it’s not a case of 'just haven’t gotten around to it.' You see, the problem is that I read somewhere (a Feng shui book, maybe?) that pink is a creative color. Since I sold my first novel a few months after we moved in to this house, I’m afraid that if I paint my office, poof. My muse will take off for pinker parts."

There are times when she suffers from a bit of writer's block, despite the pink room.

"It's my brain’s way of telling me that I’m losing the thread of my story, or that I’m about to make (or have recently made) a wrong turn," she told me. "So when I get to the point of staring at the page and fiddling with commas, I walk away from the machine and go do something else. In particular, boring and repetitive physical activity (mucking a stall, mowing, driving, showering) seems to unlock my ‘fixit’ process, and pretty soon I will have figured out the problem."

One problem that she doesn't worry about, though, is coming up with the titles of her books.

"I throw myself on the mercy of my editors for that," she said. "Seriously. I turn in my Intrigues entitled ‘Intrigue 22,’ ‘Intrigue 23,’ etc., and call the Nightkeeper manuscripts after the hero and heroine. Then my editors ask me for suggestions, groan and roll their eyes (or at least that’s what I picture them doing) and send me some way better ideas that they came up with. Whenever I talk to a writer who has to get his/her title right before they can start writing the story (which isn’t wrong! your mileage may vary, and all that), I just shudder and think that I would never write a word if I had to get the title right first!"

On more of a personal note, Jessica has two corgis, loves them dearly, and will most likely replace them when they pass on (they are eight and ten now).

"I share the dog responsibilities with my unhusband," she told me, "who is better about making time for them when he's busy. If I were on my own, I would probably stick to cats, which do better when I need to disappear into a book and emerge only at random intervals to throw food at them and myself."

I asked her if she had any strange handwriting habits.

"I have such wretched handwriting it’d be hard to tell anything like that," she replied. "Not only am I a lefty and a doctor (two strikes right there, though technically the doctor thing mostly applies to MDs), but I skipped third grade, which was where the other kids learned handwriting and long division/multiplication. Let’s just say that if it weren’t for computers, I’d be in serious trouble! Props to my mom, though, who made me take touch typing when I really, really wanted to do another semester of wood shop."

"What is one things scientist should invent?" I wondered.

"It’s no accident that teleportation is the first magical talent revealed in the Nightkeeper books! Think about it: If we could blink ourselves from point A to point B with clean-energy teleportation, we wouldn’t need cars or planes, fossil fuel use and emissions would plummet, and we would free up considerable chunks of time. Though now that I think about it, we would have to buffer the destruction of the aviation and automotive industries … Maybe they could build spaceships instead?"

Jessica and the unhusband live in a very rural area at the top of a hill that gets what she calls "some pretty crazy weather."

"We call it our local tornado alley—with all due respect to the folks who live with real tornadoes. I've never experienced one but would like to—in a semi-controlled, nobody-gets-hurt way. I love watching the purple-black clouds come in, feeling the electricity in the air, and even hanging out in the barn while the storm hammers its way through. Then, when it's gone, everything smells and feels different."

Another random question I like to ask is, "Can you unwrap a Starburst with your tongue?"

"You know what? I’ve never tried. Never even thought to try. I guess that’s because the only time I really eat Starbursts, I get them out of the big candy jar in my CPA’s office, as a reward for turning in or picking up my tax forms. So I’d be wondering who had touched the wrappers, where their hands had been … (I was a scientist in my former life, and I’m a writer now. The two together means I can get very creative when creeping myself out.) I can, however, tie a cherry stem in a knot with my tongue. Does that count?"

Jessica is a big fan of the saying "it is what it is." It's not only a reflection of her generally laid-back attitude, but it's a way of reminding herself when she's in danger of losing her cool to ask herself if throwing emotion at the situation is going to improve things.

"If things just are what they are, and I can’t do anything to change them, then I need to let go and focus on something I can change."

If Jessica's not multitasking on some level, she gets bored.

"It took me a long time to accept that my unhusband truly can’t multitask. He’s not being difficult, he just functions best if he concentrates (cough, cough, obsesses) on one thing at a time," she explained. "But that’s one of the ways we balance each other—he’s very good at reminding me to take a moment and enjoy finishing something, rather than just charging ahead to the next thing on my list and then wondering why I’m missing a sense of accomplishment."

"Do you sleep with the light on?" I wondered.

"Aaaaaaah! Even the question makes me twitch!" she exclaimed. "No, no, a thousand times no! I'm a terrible sleeper, especially when a story is plaguing me (either because it's going well or because it's not.) I do my best in a cold, entirely dark room with a fan running, no pets, and no snoring."

The sleeping arrangements is the main thing that stopped Jessica from ever applying to be on the show Survivor. She can force herself to deal with lights and noise, but she said, "It makes me cranky."

You can keep up with Jessica on her website, http://www.jessicaandersen.com
Posted by Long and Short Reviews at 4:00 AM