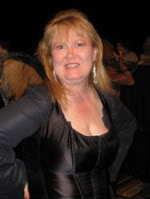 The Long and the Short of It is very pleased to welcome back Faith V. Smith who visited with us last year. You can read her previous interview here.

"First, welcome back to The Long and the Short of It. What is the most exciting thing that has happened to you over the last year?"

"Thank you, it is great to be back here! I love your site, what you do for authors, and all your readers! Well, one of the most exciting things is that I sold two books last year and both have been released! I was thrilled The Wild Rose Press picked up the second book, Dunbar’s Curse in my Bound By Blood, The Legends series, plus a time-travel called Viking, Go Home. This was a writer’s dream come true for me."

Dunbar's Curse is the story of Miles Dunbar, one of Zacke Kensington’s friends from several centuries before. It is the story of his love for one woman and if she will or won’t accept him as a vampire.

"There’s some suspense in this and I’ve been told the ending was good. It’s hard to brag on my own work," she said with a laugh. "Now, the other release is a time travel called Viking, Go Home. It is about Wulgar a Viking who has a bit of a problem keeping his braies up, and a faery princess sends him to the future to learn the difference between love and lust. RT gave it a 4 and equated it to another time travel by Jude Deveraux’s, again, I hate to brag on my own work, so any interested can find the reviewer’s comments on my blog."

Faith's plans include book three of the vampire series and the story of the faery princess also from the time travel. She's also working on several other projects, including a couple of paranormals and a medieval.

Even with staying busy with her writing, Faith still finds time to network. She's just returned from Columbus, Ohio, and the 2010 RT. I asked her to tell us some of her most memorable moments.

"I have been to eight conventions. I think there have been several wonderful memories over the years, one being in 2006 when Lil Gibson and I met for the first time after I reviewed her book Sherem; this was before I was published. Another awesome memory was in 2008 when Carol Stacy announced I could no longer do reviews for RT because I was to be a published author. This year I had a reader recognize my name tag and tell me how much she loved Kensington’s Soul, the first book in my vampire series. This was unbelievable! I loved it!"

The first book Faith wrote was her medieval novel and, even though it's not yet sold, it remains her favorite.

"What inspired you to write that first book?" I asked.

"I just couldn’t not write it. The idea stuck and I needed to get it down on paper. Was it any good? Well, I think the plot was but as for the fundamentals of writing I was clueless."

Coming up with titles is sometimes difficult for Faith.

"It seems I have to have a title before I can more too far into the book, but suffice it to say book 3 of the vampire series does not really have a title yet," she told me. "Bummer."

When she's not writing, Faith loves to read.

"I know you’d think with me writing I might want to do something different, but I have so many favorite authors and love to get my hands on their work!" she said. "At the moment, I am reading an Amanda Ashley vampire novel. I just finished one by Angela Knight, Teresa Medeiros, and a couple of more."

The hardest part of writing the books, for Faith, is the ending.

"It means the book is finished except for sending it in and waiting," she explained. "It’s hard to let go of the characters."

"Not sure I have one, but I have to be comfortable to write."

Interestingly enough, Faith didn't seriously think about writing as a career until she was older.

"I wanted to be a lot of things from the time I was 14 on," she told me. "At first I wanted to be an Air Force pilot. Wouldn’t have worked out, I’m scared of heights. I wanted to be a singer and that did happen. I had my own Southern Gospel group for 10 years and loved singing about the Lord."

"When you looked in the mirror this morning, what was the first thing you thought?" I asked.

She laughed. "I’m not sure I looked. Seriously, I still see the girl I was combined with the woman I am. That probably makes no sense, but I just see me."

Faith told me she didn't want to know anything about the future.

"It's scary enough without having a time line of what will happen," she said.

However if she could wish for anything?

"A lot of things, I think mostly for me to know that when God calls us home, I’ll make it into Heaven," she shared.
You can keep up with Faith on her blog, http://faithvsmith.blogspot.com,
Posted by LASR/WC/A Admin at 4:00 AM