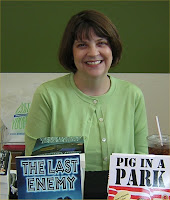 So, in addition to indulging in more space travel in Girl Gone Nova, I found myself taking a walk on the Steampunk side. Steampunk is a genre gaining some serious traction among readers. What is it?

Well, it’s not really punk anything, though you might see hints of punk in some of the clothes fans wear to conferences. What it is, or what it tries to be is science fiction anchored in some aspect of Victorian times. There can be anachronistic steam-based inventions, or alternate realities. Think Wild, Wild West. Back to the Future II. HG Wells. Jules Verne. But like all made-up fiction, it can go in almost any direction the author or the fan wants it to. I’ve included some links on my website to costumes, artwork and jewelry associated with Steampunk. 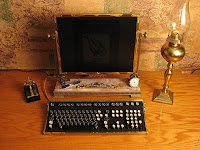 Some people have even adapted their current technology to appear Steampunk, such as the (working) computer to the left. For information on the creator, see here.

It has even made its way onto television. NCIS Los Angeles had an episode where team members went to a Steampunk club. Unfortunately, they didn’t do their homework and annoyed Steampunk enthusiasts.

I hope they won’t be annoyed with my Steampunk novella, Tangled in Time, since I mixed it into my science fiction romance. And because my version of steampunk will also show up in the next, to be written, novel in my Garradian/Project Universe series. There is no doubt in my mind that injecting a bit of Steampunk into my science fiction has ginned up my muse almost as much as some chocolate and Diet Dr. Pepper™.
Posted by Long and Short Reviews at 4:00 AM

When I win, send me The Key because I just bought Girl Gone Nova for my Kindle. Woo-hoo!

whoohoo! Thanks so much, Shannon! Love your positive attitude, too! LOL!

I woke up doing a conga dance in my head (because the body just won't con or ga. lol)

P.S. Don't you LOVE the kindle?

I love my Kindle so much that when I can't get a book on Kindle I really hesitate to buy it. I know you have lots of different devices, which do you like the best?