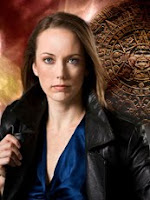 Who is the easiest character for you to write? The most difficult?

The two easiest characters for me to write have always been Lucius and Rabbit.

Lucius is the geeky hunk (hunky geek?) who has mostly outgrown tripping over his own feet, but always falls back on his inner nerd when threatened. Or at least he used to. In Demonkeepers, an ancient spell helps him become the warrior he’s always wanted to be … but that comes at a price. Since I’m a foot-tripping-over geek myself, I totally relate to Lucius.

Rabbit, on the other hand, is a favorite of mine because he’s a walking example of Murphy’s law. Anything that can go wrong will go wrong if Rabbit is involved. Since I feel like that most days, he’s got a special place in my heart. I also love that he’s got the guts to say things that I would think, but not say.

As for the flip side, Michael’s book (Skykeepers) was a tough one for me because I had a hard time getting inside his head. I hadn’t been in his point of view prior to writing Skykeepers, and didn’t really know what made him tick.

So writing that book wasn’t just about getting the story down on the page, it was also about figuring out why he was doing/thinking/saying the things he was.

And then once I figured out what his deal was (he’s very dark), I had to really work out why nice-girl Sasha, who doesn’t want anything to do with magic or the 2012 war, would stick around long enough to fall for Michael and realize that there’s another layer under the dark-and-brooding alpha male.

FMI about Lucius, Rabbit and Michael, please visit www.JessicaAndersen.com.
Posted by Long and Short Reviews at 4:00 AM

I can see why Lucius and Rabbit are the two easiest for you to write about. It's hard not to feel for nerdy or unlucky types, because I think we've all been there (or at least feel like we have). You can relate to them.

I will definitely have to check out your series!

Exactly, Lisa! Thanks for the shout out, and do check out the books :)

I can relate with Rabbit very much; funny how things go with some in this world.

Robyn-- I have a feeling Rabbit's book (the finale in the series) will be dedicated to those of us in the 'anything that can go wrong, WILL go wrong' camp!

I don't know what it is, but it sounds contagious!

I'm loving these extra's your talking about this week. It's like an inside look at everything. So Rabbit's book is the last book? Sounds like it will be a great one!

You've turned Rabbit into a fascinating character, and I look forward to reading the series finale.

@ Brenna- I'm glad you're enjoying the essays! I had fun putting them together.

And, yes, Rabbit's book will be the finale. Who better than him to *really* blow (stuff) up?? LOL!