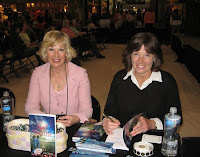 Dear Readers and Fellow Authors who know us,

You have heard this story many times – our apologies for enjoying the retelling so much!


January 26, 2008, Universal Studios, Orlando, Florida. We had arrived on this sister trip the afternoon before, a Friday. Our vacation mode, slightly delayed due to day job preoccupations via the computer and cell phone, kicked in this Saturday morning as we ventured out to enjoy the attractions in the theme parks.

Seated in an outdoor amphitheatre waiting for a stage show – The Eighth Voyage of Sinbad – to begin, Pat checked her phone for email messages. Nicola Martinez, then Sr. Editor for The Wild Rose Press (now head of White Rose Publishing, a subsidiary) had “Called” us with a contract offer for our inspirational romance, Jewel Of The Adriatic. Stunned with elation, Pat whispered, “We sold our book.” A canon exploded on stage. Really!

Beyond ecstatic, we left the park and engaged in a long round of telephone calls home. In a daze in our shared waking dream, we returned to the park. Every ride seemed the ride of our lives. Back in the hotel room at dinner hour, Pat checked messages again. An email from Joelle Walker, Editor, The Wild Rose Press, Crimson Rose line, offered a contract for our romantic suspense manuscript, Against Doctors Orders!

Pat, hands clutched over her heart, landed on one of the hotel beds exclaiming, “I’m having a heart attack! We just sold another book!” When Kathie recovered from the fright that Pat really was having a heart attack, round two of our telephone calls home ensued. Appearing to family that we somehow had forgotten we called earlier (have you two been drinking?), we explained our fantastic news.

Each year since, we plan a sister trip around the January 26th anniversary of THE CALL. Reliving that experience “never gets old”. :-)