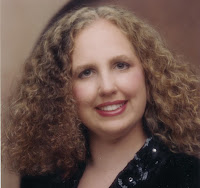 My latest release is a novella at Whispers Publishing:

Healer’s Fate - Corliss Rumdone hides behind her status as Healer to avoid the normal wolf pack hierarchal challenges. A forced mating changes the course of her life. Instead of Raymond, the beta wolf selected for her, she mates with Liam—her best friend and heir to the Alpha pair. 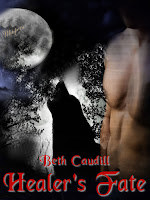 Liam whisks them away to a shifter retreat so they can allow the mating bond to settle in private. But interference from those seeking power and two terminal children arouse past hurts and challenge their new relationship. Even their home is not the haven it should be as Liam must watch Corliss fight for the right to stay his mate. For one healer, death becomes a weapon to balance life.

Bitten by Books gave Healer's Fate a 4 1/2 tombstone review. Emma D. says "...I must admit to being entranced and wanting to hear more of Corliss and her world." You can read the entire review here.

The first chapter is included in a sampler you can read from my blog. Here is an excerpt from the middle of the book:

Corliss stepped onto the cabin’s back deck. The gentle breeze caressed her bare skin. Liam had kept her indoors the past five days. With a little smile, she thought it had been quite satisfying, but she wanted to run, to feel the wind in her fur. At home, a part of her day included exploring the forest as a wolf.


Liam’s dictate to stay inside had her pacing the floors. He might be able to sit around designing all day but she needed to feel the spongy moss between her claws.


About to take the first step down to the grass, she scanned the surrounding forest, searching for any threats. A movement in the deep shadows caused her to hesitate and step back onto the center of the deck.


A midnight black wolf walked into the moonlight. If she didn’t know better, she’d swear the wolf strutted. But that would be ridiculous. Bigger than a natural wolf, she knew it to be another shifter.


The animal’s head came up, and she shuddered as a calculating look crossed its face. Maybe coming out without Liam had been a bad idea. The air around the animal shimmered as he changed.


In its place stood a good-looking man who had nothing on Liam. He had short, not-quite-black hair perfectly in place atop a round baby face. She couldn’t make out his eye color but it didn’t matter to her. She had her Prince Charming. No need for another.


Her stomach threatened to rebel at the thought of him touching her. Although he seemed charming enough, something didn’t feel right. His smile appeared a little too practiced, as if he forced it rather than expressing a genuine attraction.

“Not tonight. I only stepped out for some air.”


The hiss of the cabin’s sliding glass door echoed in the still night. Liam’s woodsy male scent surrounded her as he wrapped his arms around her. Corliss leaned against his hard chest muscles, safe in his embrace.


“Sorry, I already have a partner for the night.”


Liam leaned down and whispered in her ear so only she could hear, “Only for the night? I think someone is being naughty and asking for a spanking.”