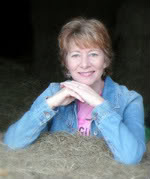 The Long and the Short of It: LASR is pleased to have Stacey Coverstone with us. Stacey's latest book, Outlaw Trail, was released by Champagne Books on December 1, 2009. Outlaw Trail is the first in a series called Wild West Adventures. The second book in the series will be published in April of this year.

Stacey shared a little about Outlaw Trail with us.

At nineteen, Josie Hart has lived a hard life on her New Mexican farm. A cryptic letter gives her a chance to change all that and guides her on a perilous journey toward freedom. But, there are others who want what she's after, and will stop at nothing to get it.

Grey Paladin seeks justice after having had his fortune stolen out from under him. He'll do whatever it takes to retrieve what's rightfully his and reunite with the only family he has left. That is, until a feisty girl stands in his way.

When Josie and Grey form an uncertain partnership, they must battle outlaws, nature, and each other while riding two hundred miles of dangerous trail to reach their destination. What they discover at the end is something that's been sorely lacking in both their lives--leading them each to rethink what the future holds.

"I’ve written five novels that have been published or are coming soon, two published short stories, and I have two novels in the works," Stacey shared with me. "I guess the first published novel is one of my favorites because it takes place in a New Mexican town that I was planning on moving to at the time I wrote it. I also love Outlaw Trail because of the two main characters and the traditional western aspects in the storyline."

Stacey told me she's been writing ever since she can remember. "In sixth grade I wrote my first play called 'Shotgun Weddin’,'" she said. "I’ve written short stories and poetry all my life, and I only began writing novels in November of 2006."

She's currently working on a contemporary paranormal romance called A Haunted Twist of Fate set in the Black Hills of South Dakota and agreed to share a blurb with us.

While grieving the loss of her parents, Shay Brennan is drawn to the Black Hills of South Dakota and finds herself the owner of a historic 1885 saloon. But, she soon realizes she's not alone in the Buckhorn. Two ghosts are sending her messages. One needs her help, while the other is intent on doing harm. What do they want with Shay? And what part does she play in the terrible events that happened in the saloon a century ago?

Colt Morgan, a local realtor who sold the Buckhorn to Shay, is a non-believer in the paranormal, but unexpectedly finds himself helping her solve the mystery of who the spirits are. Widowed for ten years, Colt's not looking for love. So why does his heart pound every time he's near Shay? And how does his connection to an old friend tie in with her and the haunting?

Two hearts in the present are linked to two souls from the past. Could it be coincidence, or is it a Haunted Twist of Fate?

"What inspired you to write your first book?" I wondered.

"My husband gave me a unique gift for earning a Master’s degree in 2006 at the age of 48—a week at Cowgirl Camp at the Double E Ranch in Gila, New Mexico. Along with six other women from differing parts of the U.S., we spent the week doing ranch chores, riding horses through the Gila National Forest, learning to rope, barrel racing, and team penning, with the experience culminating in a day-long cattle drive through the mountains. It was so inspirational that I came home and immediately started my first novel ever. I had so much fun that I went back the next year and based my second novel, High Lonesome, on that dude ranch."

She didn't have a space of her own when she first began writing, but wrote on her laptop at the dining room table.

"Now I share my husband’s office and I love having my own little desk in the corner," she said. "I’m surrounded by everything western, including a collage I created, two painted pony statues, framed pictures of my book covers, a cast iron stagecoach, a cast iron wagon pulled by horses, cowboy boots, and a rock that has the word 'IMAGINE' carved into it."

When she's not writing, Stacey likes to ride horses with her husband (they own two) and play with their two large German shepherds (who she admits are "spoiled rascals"). She also enjoys photography, traveling, and making scrapbooks about her vacations.

Finally, I asked Stacey what advice she would give to an author just starting out.

"Fist, find a critique partner that is a seasoned author with a few published books under her belt," she said. "You will learn so much from a writer who has been through the editing process several times. This person can give you honest critiques, constructive criticism, and provide tips that most new writers are unaware of. Second, don’t ask family members and/or friends to read your work and give opinions, because they’re all going to say they love whatever you write. And, finally, learn all you can about the craft and persevere. Don’t let rejection discourage you from making your dreams come true."

You can keep up with Stacey on her website, http://www.staceycoverstone.com
Posted by Long and Short Reviews at 4:00 AM

Hi, Stacey! I also love Westerns and Cowboys! I visited your website and signed up for your newsletter. That Cowgirl Camp sounds like a ton of fun! Best wishes for continued success.