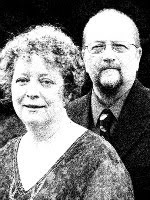 The Long and the Short of It: LASR is pleased to have Joyce and Jim Lavene, authors of over fifty books, visiting with us today. Joyce and Jim are a wife/husband writing team who very literally write together. They share a very large desk and sit across the computer monitors from each other, telling the story back and forth, like a round robin, until they have a rough draft. The room itself is shared with their black cat, Quincy, who writes with them. A window in the small room looks out into the woods beside their house.

"We always have maps, pictures and notes about the project we are working on all over the place and lots of calendars with deadline notes!"

The calendars have to be a lifesaver for them, because they have many series, not to mention characters, to keep track of. And, we have to mention the characters because each of their series are heavily character driven.

"The plot revolves around our characters," they told me. "In our Peggy Lee Garden Mysteries, 50-something Peggy Lee came to us as a botanist with an expertise in poison who also runs a garden shop. She was widowed but met a younger man (oh dear!) in her first book, Pretty Poison. In our Renaissance Faire Mysteries, 30-something Associate History Professor Jessie Morton spends her summers at the Ren Faire in Myrtle Beach, SC. She's kind of crazy, passionately in love with Village Bailiff Chase Manhattan and likes to play Cupid with her friends. She is also working on her PhD and learns a new craft for her dissertation in each book. In Ghastly Glass, the second book in the series, it's glass art. These characters are very different in the books and in our minds. They become part of your life."

They are currently working on another new series that is set in Duck, NC on the Outer Banks. The protagonist, Dae O'Donnell, is the mayor of Duck and she is a finder of lost things. She can find some things psychically and she is drawn to things that people lose. She runs a thrift store called Missing Pieces, which is also the name of the series.

"It is filled with many of her 'finds'," Joyce said. "She gets involved with two sisters in the first book, Death Watch when one of the sisters is looking for a missing watch. Dae finds it on the arm of the other sister, who happens to be dead; murdered and buried in a sand dune. She's a very interesting character and the book has been a lot of fun to write."

Death Watch is scheduled to be released in May.

You can see that often the titles are based on something in the book itself. Joyce and Jim have working titles to get them through the first draft, but don't actually title something until they are finished writing it.

One of the hardest things for them to get used to, they told me, was the fact that people other than family wanted to see what they looked like—they hate how they look in pictures!

Not only do they write together, Joyce and Jim just enjoy spending time together. When they aren't writing, they spend their time driving the back roads, taking photographs, spending time with family and friends, gardening, and working on computers. They will also take the time to help their son with his pizza place, Pizza and Beyond, even to the extent of delivering pizza for him at midnight. But, it's a fair trade, because they get their favorite pizza from him-- stuffed crust, green pepper, onion and mushroom, but he has to make it himself.

"Definitely reading. Like most authors, we have always loved to read. There is something about the printed word that is impossible to ignore. If words paint pictures in your mind, you write. And you do it because you have to, not because you're paid for it or it looks like something you should do. Writers write."

The hardest part of writing their books, however, comes after the book is written—it's called revisions.

"When you write a book, it's all yours," they explained. "Until it's time to turn it in to the publisher. Then it becomes part of a team effort. It's as hard to let go of it as when your kids grow up. You have to believe in the people you are working with and feel that they will do a good job, that they have the best interests of the book at heart. You learn to live with changes they ask for, but you never really like it."

"What is your strangest habit?" I wondered.

Joyce said, "Looking outside each night before I lock the front door."

Jim's strangest habit is one that I, personally, don't find strange at all--eating grits for breakfast.

Even though Jim and Joyce have a cat and had a dog until it died last year, their favorite animal isn't what you would consider a "normal" household pet. What is it? "The cute little baby possum who wintered in our basement."

They both emphatically denied ever eating a crayon, but did confess they had each made at least one crank phone call.

"Neither of us will say exactly where, when or to whom. We will take that secret to our grave," they declared.

They both enjoy thunderstorms, sitting awake and listening to them for hours.

"I'm pretty sure we can get along with the one we have," Joyce responded immediately after.

Finally, I asked them what advice they would give to a new writer just starting out.

"When we give workshops we always tell people to develop an ego and some thick skin. You have to be willing to take some hard knocks learning your craft and even after you have been published. Editors' remarks aren't always easy to swallow and reviews aren't always kind. Persistence and a willingness to fall down are essential to this craft."

You can keep up with Jim and Joyce on their website, http://joyceandjimlavene.com
Posted by Long and Short Reviews at 4:00 AM