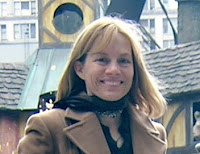 Good morning, everyone. Thank you so much for joining me this week at Long and Short Reviews. Today is my last day to blog here, and I’ll be answering questions posted earlier. But feel free to still leave comments and ask questions. I’ll be here all day, and will draw winners’ names around 6:30 p.m.

OK, onto your questions:


Q. I’m curious since it sounds as if when you started ANAM CARA, you weren’t planning on a sequel. But that five-year gap… How much work did you have to develop those interim backstories? Do you have pages in a binder somewhere telling each of their journeys? –Amy

A. Once I opened myself up to writing this story, I knew exactly how Aedan and Tess had spent the intervening years, but I didn’t write it down. I’ve found that if I keep it all in my head, it’s more accessible when I write.

What was tough, as always, was weaving the past into the present so that I reveal what happened without resorting to a flashback (I hate flashbacks). I’m sure readers will let me know if I succeeded or not.

Q. I’d love to hear what kind of planning goes into creating a sequel or series. Do you have a notebook to keep things straight? -- CJ

I always keep a book journal to write down thoughts, phrases and scenes when I’m not at the computer, but with this series, I discovered I needed quick references to key dates, people, etc.

The Druids of Duncarnoch world is rich with secondary characters, many with their own backstory. So, not only did I have to go back to ANAM CARA and mark key events for all these people, but I also had to fill in the missing five years for them to keep myself straight.

I put together a timeline to keep track of what happened when. It’s a simple spreadsheet that uses only four columns: year and month, date, event, i.e. Tess Aedan meet, day of week. I kept a printout by my computer and referred to it as needed.

Q. How (do) you redeem characters that in earlier stories might have been, as you said, “mad, bad and dangerous to know.” Do you ever struggle to make them sympathetic and worthy of reader sympathy and redemption, having made them so bad in the first round? – Kris

A. Oh, yes. Redeeming Aedan was a challenge. So much so that I may never do it again. LOL!

In ANAM CARA, Aedan was the catalyst that set the story in motion and kept it moving. Bran had a vision of Aedan dead, so he kidnapped him from the priory. They travel to Carlisle where Bran thinks his younger brother will be safe, and Bran risks his relationship with the heroine to protect Aedan.

Through it all, Aedan is angry, selfish and mostly unappreciative. He was 17, which explains part of it, but it’s also who he is. Having grown up without family or protection, he entered the story boiling with anger and resentment. My critique partner said, “he’s interesting, but not exactly likable.”

However, because redemption is a process, I realized that I needed something in Chapter One to hint at the man Aedan could become. Otherwise, readers wouldn’t care about his journey. So I gave him a nephew, Daz, to care for. From the start, Aedan had a way with animals and children, so I pulled that out to show his protective and loving side. He is very different with Daz than with anyone else, except for Tess.

And between you and me, I love the scenes with Aedan and Daz. There’s genuine love there, and an unbreakable bond.

Q. Will there be a sequel to TIES THAT BIND? Do you think that having done an unintended sequel, now you'll be on the lookout for that potential in every book you write? – Diane

A. Yes, there’s a sequel to TIES THAT BIND. ENTHRALLED, in edits right now, tells Dyllis’ story (Bran and Aedan’s younger sister who was mentioned in ANAM CARA). It’s also a direct continuation of the external conflict of TIES, picking up the story about a month later as the treasonous plot against King Henry II continues to play out.

And now that I can look back on the three books, I realize that even though I didn’t plan a series, my muse did. There are snippets in ANAM CARA that play out in TIES and ENTHRALLED.

I hope I don’t look for a sequel in every book I write. I like stand-alone stories. But this book has taught me to trust my muse, so I will.

Q. How do you motivate yourself to write when you just don't feel like it? Is it any different now that you’re published than when you were pre-published? -- Rebecca

A. For the most part, I can write on demand. I spent 10 years as a newspaper reporter and editor and I learned the first week on the job that I would never again have the luxury of waiting until inspiration struck. Sometimes I got inspired, most of the time I didn’t. That training serves me well as a novelist.

Unfortunately, forcing myself to write gets words on the page doesn’t always mean I produce quality work. But I’ve found that as long as I get it down on the page, no matter how awful, I can move forward. It just means I’ll spend more time revising that particular section than I will others.

For me, the difference between being published and unpublished is the number of people affected if I miss a deadline. Once again, my job is to sit down and write—and if I don’t, this career will crash and burn around my ankles. That is very motivating.
Posted by Long and Short Reviews at 4:00 AM

Keena, I loved the questions and answers. It's amazing how you may not plan something and it kind of grows into it's own series isn't it? Reading Ties that Bind make me want to read Anam Cara for little subtle clues I might have missed. (Much like reading JK Rowling's series for me)

I'm glad to see there will be another in the series.

Are you interested in writing a book on the romance of Richard and Kathyrn? I think that's a couple that has a lot of potential.

Overall, I can't say how much I enjoy your writing. I love how you blend the history and fantasy.

Hi Keena,
Thanks for answering our questions and for hanging out with us all week.

Hi, Steph. Funny you should ask about Richard and Kathryn. I wrote their story first, but in many ways I was still learning. I, an agent, several editors saw the potential, but there were also serious flaws. Between that book and ANAM CARA something happened. My writing became richer and deeper, and my ability to craft a good story grew stronger.

I may go back and rewrite that story one day, but for the moment I really don't plan to.

No problem, Jane. I thoroughly enjoyed hanging out here all week.

I should clarify, too. I'm in Chicago, so my 6 p.m. is central time. It'll be another hour or so before I can get home from work and pick the winners.

Hi, everyone! Sorry it took a bit longer than expected (the day job, then traffic, then I had to run to the store...you know how it is). But here are the winners....

25 percent off coupon from The Wild Rose Press--LK Hunsaker!

25 percent off coupon from The Wild Rose Press--Nine Johnson!

Copy of TIES THAT BIND--Kris Kennedy!

Copy of TIES THAT BIND--Booklover!

Set of ANAM CARA and TIES THAT BIND--Rebecca J. Clark!

I'm so excited. Please contact me at keena@keenkincaid.com to collect your prizes.

Everyone--Thank you so much for joining me this week, and a really big thank you to LASR for hosting me! I enjoyed it tremendously.

Thanks for all the answers Keena. I'm happy there will be another story with Dyllis, I love connected books.

Hi, Dena. Yes, after I finished with Aedan, I realizes I really needed to make sure she was OK. And her story was fun to write because I could come at it from a completely new direction.