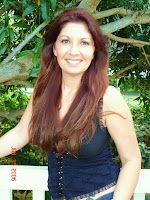 Why I love Romance?

I am such a hopeless romantic. From the time I read Elizabeth Barrett Browning’s poem "How do I love thee?" I was hooked. Some of my favorite movies are Romancing the Stone, Six Days Seven Nights, While you were Sleeping, Notting Hill, Some Like it Hot, and The Saint..all romances with a happily ever after and elements of comedy, romance, or adventure. Every day around my busy life of family I am creating new ideas, scenes, and plots in my brain. Conjuring up scandals, love triangles, cliff-hangers and such, and it just works for me. So when I get the chance to finally sit down at my computer I can type out more romance. Every once in a while I will throw in some suspense, a weapon, or some sexy competition for my hero and stir things up a bit, but mostly the knight in shining armor gets the girl and is headed for a wedding or at least the sunset.

I guess the reason I really love to read, write, and watch romance is for the magic. I know it sounds silly to some but there is nothing like watching the hero admit his love to the woman he desperately can’t live without while rescuing her from danger or absolutely making a fool of himself in front of a crowd, or even posing nude while she draws him to make good on a bet like I did in Rodeo Drive. There are so many stories unwritten of how people have fallen in love and I will continue to have fun writing some of them out.

He nodded and removed the towel. He uncrossed his legs

and sat straight up. I bit my bottom lip and hid behind the

canvas. Nick Bennett had nothing to be embarrassed about.

"Are you laughing again?" he asked.

I peeked around the canvas and stood up. More at ease

replied. I shifted his shoulders and tipped his chin slightly to

"Your hands are cold."

He took my hands and rubbed them between his. I

with his hands, and that he was in front of me totally nude.

I gently pulled my hands away and positioned his

shoulders for the second time. "Stay still, okay?" I whispered.

"I don't know why you're so nervous. This isn't so bad, is

it?" I asked, and tipped his chin to the left.

"Why don't you try it, and I'll ask you the same question?"

"I tell you what. If you let me sell this painting on Venice

Beach, I'll be your model."

I stepped back and looked him over. I positioned him

leaning to one side. One hand gripped the stool seat, his

other hand rested on his thigh. His left foot rested on the

bottom piece of wood on the stool, his right foot touched the

"What if some weird man buys my portrait?" he asked.

Rolling my eyes, I began to draw him. I sketched his

shoulders around each bicep. With every stroke, I learned

some detail about Nick Bennett's body. Mostly, I drew and

painted landscapes, so for me portraits were unfamiliar, and

more difficult. I continued to draw his sides and down each

thigh. The muscles in his legs were defined. It looked like he

had ridden a bike more than just that one time at the beach.

I sketched both his legs down to the tips of each toe. His feet

were as nice as his hands. No crooked toes or bad toenails. I

sketched up the inside of each leg, growing nervous. He

hadn't moved his head. He was looking slightly to my right.

He wouldn't know what I was focusing on. I kept going with

all the detail in between his legs. It was a dirty job and I had

the pleasure of doing it. It took me an hour to outline his

shape and get the perspectives correct.

"My butt is numb," he finally said.

He stood up without the towel and walked around for a

came closer to me.

"Stay back there," I said. I held up my hand and motioned

"What? Come on? How do I know you just aren't scribbling

on the canvas and staring at me?"

"Fine, one look, but after that, not until it's finished."

He came around my side and leaned over me. I felt his

I swallowed hard and studied his expression as he

"Not bad," he said and shrugged. "Of course I'm not that

I dared not turn around and take a closer look. "Would you

like me to draw it smaller?" I asked, staring forward.

He folded his arms across his chest and leaned down closer

I love that excerpt! I can't wait to read the book.

I need more, lol; that sounded so good.