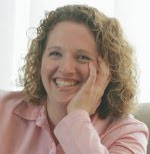 She's a brave woman and currently working on Shattered Expectations during the National Novel Writing Month (NaNoWriMo). You can keep up with her progress (as well as other things going on in her life) on her blog.

"I was half way through writing Compromising Positions when I heard about NaNoWriMo," she told me. "National Novel Writers Month mandates that you start a brand new story to participate in the race to write a novel in a month…so I set Compromising Positions aside and wrote Just One Spark (a 2006 release from Mills & Boon Modern). Coming back to the story was hard after living with other characters for a month, but the story is better for what I learned by finishing the other novel."

Jenna told me that, when she's writing, she usually comes up with a scenario first, then her mind runs through several characters before settling on who would work best in the set-up. She can't start writing, however, until she knows her characters.

"Compromising Positions started with a CNN segment," she shared. "Par for the Course was a magazine article…but Her Cinderella Complex was the heroine, Heather. She wants to be the Cinderella of her own story, and I got that. Coming up with the characters first meant I could layer in any element I wanted…like the mock wedding, swimming pool, yacht, and private island."

Jenna told me she has to have a working title she likes before she can write a book. started out as Breaking His Rules, then became Working It Out, then morphed into Sensational Sex before finally settling on the final title.

CNN was mocking a sexy exercise class. "I thought it would be a great backdrop for a romance novel. At the time, I’d never finished a book," she told me. "I started over a dozen before the first one that saw The End. It took me a while to find the characters and play with stereotypes until I knew I’d have to finish the story because I cared too much about Sophie and David to leave them in the lurch. They so desperately needed one another to bring out the best in them, to show the other what they deserved from life and love…if they were real to anyone but me I’d thank them for that gift. They taught me the easiest way to finish a story is to truly fall in love with your characters and care what happens to them."

It takes Jenna a while to get into what she calls "the writing head space," so if she's forced to write in short bursts, it can feel like she's blocked. But, if she has a few solid hours to write, she's fine again and the words flow. Those days can be hard to find, especially with three children—two in school and a baby. She used to be able to write for an hour and a half in the afternoon and an hour and a half after the boys were in bed. Now that Grace, her baby girl, is around—her writing schedule is sporadic at best. "Someday I’ll get back up to my old pace," she said.

On a personal note, I asked Jenna if she hated how she looked in pictures (I always do!)

"Omigawsh, yes. I had a baby last year, so I don’t look like ‘me’. It’s awful. Whenever I’m asked for a picture for promo stuff I cringe. Do you think it’s cheating if I buy an art photo from a stock photo site and claim it’s me? Drat, I thought so."

She wanted to be Danielle Steel when she grew up, she shared with me. "My mom is a huge fan and buys all her books in hardcover because she can’t wait for paperback to get her latest fix. I wanted to tell stories like that, that people couldn’t wait for and counted on. Plus, as a kid the idea of having a bunch of kids and writing sounded heavenly. Now I wonder how many nannies she had to help her out."

Because her boys are school age, she finds herself using the phrase "use your words" a lot. "Of course," she said, "I find I use it a lot in critiques as well."

She considers herself a morning person—as long as she's slept, that is. With a baby in the house again, that doesn't always happen. And, she's very much a multi-tasker. "I have three kids, a dog, a husband with career aspirations that blow my mind, I manage to write novels and I don’t have a maid," she explained. "Some days, I wish I didn’t multi-task, then maybe the husband would spring for a cleaning service..."

"What is one thing scientists should invent?" I asked.

"Easy weight management. Diet chocolate. Feeling rested after two hours sleep. Diapers that change themselves. Training wheels that lift and lower based on how the kid is balancing on his big boy bike," she said. "Oh, right. You asked for one."

Finally, I asked Jenna what advice she would give to a writer who was just starting out.

"Write," she said. "It’s too easy to get caught up in taking every class and learning every ‘rule’ out there. Writing teaches you more than any class you can take."

You can keep up with Jenna on her blog, http://jennabayley-burke.com
Posted by Long and Short Reviews at 4:00 AM