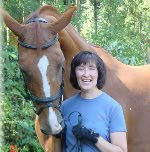 The Long and the Short of It: LASR is pleased to have Jami Davenport whose third book in the Evergreen Dynasty series is available from Bookstrand Publishing.

Jami had problems sleeping as a kid, so she would tell herself stories. Eventually she wrote them down and has a chest full of stories she wrote in her attic. "Of course, they will never see the light of day," she admitted, "and shouldn't!"

She wrote her first "novel" when she was six. "I called it Wildfire," she told me, "and it was about a wild horse (are you seeing a common theme here?). I even illustrated it myself."

Jami's passion for horses is long-lived. "I've been horse crazy for as long as I can remember drawing a breath," she said. "I've owned horses since I was in my teens. I can't imagine my life without them." She currently owns a Hanoverian mare that she rides and shows in dressage. And, like most horse women, she's also an animal lover and always has a secondary character in her stories that's an animal.

Her characters are all-important to her books. "I love figuring out what makes them tick," she explained, "why they do the things they do, and what they think they want as opposed to what they really want. Being an armchair psychologist, I always delve into their pasts and what shaped them to be what they are today."

Jami's favorite book is one that's not yet been published. Fourth and Goal is a sports hero romance—a reunion story about two life-long friends turned college sweethearts who are reunited (reluctantly) by friends a few years after college.

However, she's working on a story this month during National Novel Writing Month that might usurp F&G as her favorite book. "It's my first romantic suspense, and I"m very excited to start writing it," Jami said. "It covers the plights of single fathers, rather than single mothers, and what happens when a mother refuses to allow a father to see his child and how far she'll go."

She starts with a working title, but rarely ends up with that title. "I think about my titles a lot. I have a file of possible titles that I'll go through. I want my story to be identified by my title. So many books have these generic titles that don't fit the story and are unmemorable," she said. "So I want my title to tie into the story in a big way. Sometimes, my story actually starts with a title I love and I build a story around it."

There have been times, however, when she would go through a time where she's blocked. What does she do when that happens?

"I write one sentence every day whether I want to or not. Eventually, I write two sentences in a day. Before I know it, I'm into the story, and I'm writing pages a day."

She can't write at a desk or in total silence, however. While she was in college, she learned to study and read in the midst of chaos, and she now needs white noise to be able to concentrate or she hears every little sound. She has her laptop, her recliner in the living room, noise around her--- and she's good to go.

Part of the noise surely must come because of her dog, Leonardo. Jami's husband went to pick up their lawnmower from the repair shop and came home with a beagle. Jami had had two beagles as a kid, and she warned him that the dog would be hell on paws and would be running off every chance he got.

"He didn't believe then, but now he does. Leonardo is a little pistol but cute as they come," she told me. "The cat is not amused though, as he wasn't consulted on the new addition to his home. The cat is certain I'm his servant put on earth to cater to his every whim and need. But then again, I guess I am because I do cater to him."

Jami told me she's a picky eater, so doesn't ever really eat anything strange. The strangest thing she's ever eaten would have to be ostrich or buffalo.

She would love to know how long she'll live though, if she could know the future.

"That way I can cram everything I want to do into the time I have left and not miss out on anything," she explained.

She admitted to making crank phone calls as a kid. "You know the usual, 'Your refrigerator's running...' My girlfriends and I thought we were really clever. Do kids even do such things anymore? Ah, the good old days."

Her favorite pizza is pepperoni. "I love it but it's way too fattening so I've been avoiding pizza lately."

Jami is a Gemini and told me that she's everything a Gemini is supposed to be.

"I'm two different people," she said. "I can argue both sides of almost any subject. I love being around people. I'm creative. I'm impatient, and I work at light speed. I'm a multi-tasking junkie (It's a Gemini thing) . I juggle so many balls that I don't know how I keep them in the air. Lately, I've been dropping a few, but I'm trying to reestablish my routine so I can get some order in my life. I'm an IT professional in my day job and a writer by night, not to mention that I'm extremely social and have to have my people fix often. I'm not much of a homebody."

In fact, if she could wish for anything she wanted, she'd with for ten million dollars.

"I'd give half to veterans' charities and the Red Cross," she said. "I'd take all my stepkids and a few close friends on a vacation they'd never forget. Then I'd head to Europe and buy the best dressage horse money could buy. I'd retire and write books all day long and hire a housekeeper so I'd never have to clean or cook. I'd buy my husband that Mercedes he's been wanting."

She's very much a morning person. "I hit the ground running and never stop until I slip into my big bathtub with a good book at the end of the evening," she told me. "Then I'm done. I'm not worth a darn until the next morning. "

"Do you sleep with the lights on?" I asked.

"No, I don't. In fact, in my small development, we banned mercury vapor lights, so when the lights go out at night, you can't see your hand in front of your face. I love it like that as long as my husband is home. If he's not, I'm a chicken. I watch too many true crime shows on TV, and I don't do well alone at night anymore."

Finally, I asked Jami what advice she would give to a new writer just starting out.

"Learn the craft. Listen to others, but stay true to what works for you. Watch out for well-meaning (and not so well-meaning people) who tell you that there are rules to writing, such as you can't write about rock stars or sports stars. You can write about anything you want. If the story is good enough, you'll find an audience."

You can keep up with Jami on her blog, http://jamidavenport.blogspot.com
Posted by Long and Short Reviews at 4:00 AM