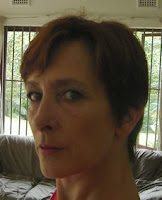 My dad used to say I was born with a pen in one hand and a book in the other. He overlooked the animal magnet. I’m not quite sure where that’s located, but it’s definitely here somewhere… If you ask most people what they collect, it’s usually pottery cows, or stamps, coins, porcelain plates. You know the stuff I mean. Yours truly collects pets. Not consciously. It’s just this darn animal magnet. Every now and then it kicks in and hey presto, the zoo grows.

There’s a downside to a living, breathing, attention demanding collection. I have my hands full most of the time, feeding time is a frenzied affair, and more often than not I feel like the old woman who lived in a shoe. I have days where I’d like to ship the lot of them off somewhere far away… All in all, I now have 7 on board - four German Shepherds, a Great Dane masquerading as a Maltese Poodle and two cats. (It’s true. See for yourself at “My Zoo“) but actually I love them all and they put a lot into my life.

Another downside is that they all seem to have “odd” personalities. Some even have personality issues (we even had a cat once who had to go on “personality modifiers” – he somehow got the weird idea that his tail was an alien creature that had attached itself to him and need to be killed and removed, piece by piece if need be) or other disabilities, like our beloved Shadrach, a German Shepherd with brain damage from birth and epilepsy, who functioned only on the most basic level of pure instinct… eat, sleep, poop, then eat again… Still we loved him dearly and he loved us for the short time he was with us. 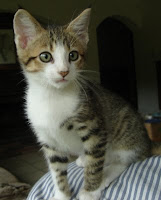 Sadly, our little rescued kitten Roscoe simply vanished one day, and we’ve cried many tears over him. I searched myself to exhaustion through ever road, street and piece of bush in our area with no luck. But the other day, along came Phat Larry. He’s not so phat right now, having been a bush cat for a fairly long time but the size of his head, ears, tail and feet present unlimited growth potential. Let’s just say “little larry” didn’t fit somehow. He simply moved in and is determined – no absolutely committed to working very enthusiastically at living up to his name, and I think it’s safe to say the old South African saying “as happy as Larry” just took on a whole new meaning. Now I just need to find a way to teach him that rescuing him from trees every second day is not my favorite pastime. Besides, I’m getting a little too old for that lark… 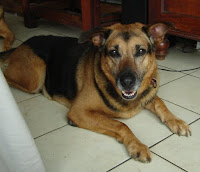 Of all of them, my old Keila, the matriarch of the family, is still the naughtiest and my best friend. While barely a pup, she ripped through a door to save my life the day I was held up at knife-point. I still don’t know how she did it, except it doesn’t say much for the door! She tried to do the same when my little tenant was brutally attacked one day, but the door was a lot more solid than the last one. She raised nine babies without batting an eyelid, and isn’t at all phased to have some of them move back home. Just mothers them all including the Maltese and the cats.

Most of all, she makes me laugh. Her best trick is stealing things. Still now, definitely grey and matronly (nicknames: Pork Chop and Rotunda, with good reason) she will flatten those ridiculous little ears along her head, get that particular wag and I swear she actually smiles, and proceeds to rifle around in whatever cupboard, box or bag might be open for something to steal. The game of course is to get it away from her. If you ignore her she waddles off to hide it in the couch. Anything missing? Look in the couch.

The other infuriating habit she has is the early morning wake-up call. The “I-need-to-go-out. Now” thing. I can’t even begin to imagine where she learned it. I’ve never ever seen (or heard) another dog even attempt it. But it is a guaranteed get you out of bed thing. She simply positions herself on which ever side of the bed gets her in close, then leans in so her mouth is right by your ear. No, no licking, heavy breathing… She clacks her teeth. Like castanets in the hand of an overly enthusiastic flamenco dancer. And continues to clack for however long it takes. It’s not usually long.

My “collection” may bring any number of headaches, but it’s a bit like parenting. You love ‘em, and sometimes you love to hate ‘em, but life just wouldn’t be the same without them. And I find their characters, their breed characteristics, their personalities all seep into my psyche and find expression in my books, all which contain animals in one form or another.

Life just wouldn’t be the same without them. And, truth be told, I don’t think my writing would either.
Posted by Long and Short Reviews at 4:00 AM