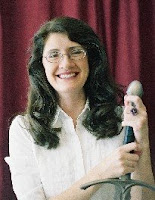 To start this essay on demons in fantasy, here’s a brief excerpt introducing one of the demons from my first fantasy novel, CHOICES MEANT FOR GODS. In this scene (already underway) Nigel and Chariss practice their sword technique in the training arena at Arcana. Nigel toys with Chariss because he just wants to get to know her a little better.

At one point, she thought Nigel ignored an accidental opening she’d left, and it angered her to think he wasn’t trying his best. Did he think she needed favors to win the match? Did he think she wasn’t an excellent swordsman herself? When she went on the offensive, seriously, he was caught by surprise.

The press, the attack, the speed with which she suddenly came at him stunned him nearly as much as her skill. It took a minute of this onslaught, but she managed to lock the hilt of her sword against his and they struggled closely. She was shorter than him by a good seven inches, and didn’t have nearly the upper body strength he did.

So the last move was a mistake, she thought. She’d wring her way out of it and try another tactic. But she didn’t get the chance.

With his empty hand, Nigel reached his arm around her waist and spun her. Now that her sword arm was free and her back to him, she beheld one of the training monsters rushing toward them.

“By the gods!” she gasped, taking up a stance beside him.

Assuming Mia or Hrazon had entered the arena and conjured this beast, she began the usual two-man assault. Nigel had trained here, too, even if in secret, so he knew how to follow suit.

This quickly proved to be no simple training exercise. In fact, as they pressed the putrid-green and yellow beast with swords clanging against its exoskeleton, Chariss saw its foot—the size of her torso, by the way—land outside the training ring.

That shouldn’t have happened.

The demon Nigel and Chariss find themselves fighting in this scene is called a ryfel. The ancient (and evil) goddess Julette created these things during the First War in Onweald’s history and they are large, poisonous, mindless beasts that exist solely to rip apart and eat followers of The Master (the society’s highest active god). Think Cthullu with less arms. He he.

At one point in CHOICES MEANT FOR GODS, Chariss (the heroine) becomes annoyed with teen Jake Taiman’s flirtations and starts lecturing him on what his family does and doesn’t expect of him. It’s not a long lecture because, personally, I don’t like reading lectures in books and figured my audience would appreciate an abbreviated one from Chariss. But she does tell Jake to watch out for pretty girls who might be demons in disguise. He tells her, basically, “yeah, I know not to set deals with demons.”

It’s interesting foreshadowing because Jake is slow to follow his own advice, we learn later that his father has already gone across that spiritual divide to disastrous effect, and a young lady who threatens our hero and heroine’s happiness needs some other-worldly dealings. Then, of course, the villain has joined forces with the ultimate demon. (Does he really think that’s going to get him all that he wants?)

In my fantasy world of Onweald, demons are bad. The edras and ryfel that Julette created have ugly, poisonous characteristics. While the ryfel are mindless, lumbering beasts that enter the mortal world by a gifted person’s command, the edras are intelligent enough to carry on conversations. They can solve problems. They can bow down and worship the evil goddess that called them into being. They can hunt down their prey. Luckily, they stink like rotting flesh so you can tell when one’s near at hand. These two examples aren’t the kind of beasts who seduce you with pretty words and lusty desires. These two are the kind of beasts who follow commands from dark forces and attack the innocent. I wouldn’t set any deals with them.

“Some days, I just want the dragon to win.”
Posted by Long and Short Reviews at 4:00 AM