Gee, This Writing Is Hard Work

When I took it into my head to write a romance, I had no idea what I was getting myself into.

Maybe that's why I did it. I can't imagine working this hard if I had known how much effort writing is.

I love romances. I've read lots of them and when I finished one, there was another in endless supply awaiting me. Until I ran out. How could I keep myself in romances? Why, I could write my own. So I decided to give it a try.

The secret is: it takes more than a try. It takes lots of tries, and I mean lots. Writing is not for the lazy, the procrastinator, or the person who lacks perseverance. Especially the last. When someone asks me to describe myself in one word, I say persistent--that's French for "too stupid to give up". 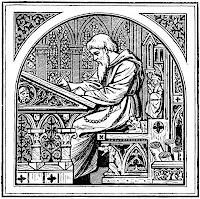 I've spent a lot of time warming my desk chair as I write and rewrite. Someone told me most writing is rewriting. I believe it. Sometimes my stuff comes out pretty good, and sometimes it's pretty terrible. So I rewrite. A lot. And I find that even the parts that sounded pretty good to begin with improve with rewriting.

So I write and I rewrite, and in between I try to think up an idea for a new story. I've taken courses on writing and on the Regency, which is the era I set my romances in. I've entered contests and lost them. I just lost another one. I doubt I’ll ever win.

I sent my first story, Lady of the Stars, to The Wild Rose Press. Lady started life as a contest entry. I lost--no big surprise there. But the editor who read it told me how to improve it and said to resubmit. I resubmitted twice before she gave me the contract. Like I said, persistent. Or maybe, stupid.

Now that I have a contract (I have two: Lady of the Stars is currently available, Pumpkinnapper comes out on September 30, both from The Wild Rose Press), all I have to do write some more stuff. Right? Wrong. Now the dreaded PROMOTION rears its ugly head.

If you think writing is hard, wait until you try promotion. I have a website. I contribute to nine blogs. I'm on myspace, facebook, twitter and those are only the big three. I'm almost up to triple digits on the number of yahoo loops I belong to.

The bottom line: Is anybody reading my story? I have no idea.

OK, after all this, why do I continue? Because I think my stories are good and someone else may like them, too. I'm probably fighting an uphill battle because I don't write much sex. But I'll continue. At least for a while.

Linda
Posted by Long and Short Reviews at 4:00 AM

You have to have persistence for anything in life. So I guess we all have a little of "stupid" in us:)

I love this book!!

I'm reading your wonderful stories, Linda! And I can't wait for the release of Pumpkinnapper! I think there are many 'silent' readers out there who simply buy the book. Which is lovely!

Just remember ... it was the tortoise who crossed the finish line first. ;-)

Hard work always pays off Linda.. And it will surely pay off for you.. just keep at it. You write'em and we will read'em.. Good luck..

Obstinacy is mean and aggressive. If you're obstinate, it's very hard to stand up to you.

Just ask my family. So I'll stick to the dark side. Obstinacy.

Hi Judy, thank you so much for liking my story. And I would never call anyone else stupid, just me! :-)

Lindsay, you always say such nice things. Thank you.

Hi LK, I never thought about the tortoise winning. Nowadays, all we hear is "fast, fast, fast". Fast without purpose gets you nowhere.

Kathleen, hard work is essential to anything. I think people tend to forget that nowadays. Thanks.

Hi Masha, nice to see you here. Hey, if "obstinate" works for you, go to it.

Hi Linda, I think that Persistense is a Writers middle name. From the many Author stories I've read every one had that in common. It's not an easy job but one that is rewarding to the writer as well as the reader. Your a new to me Author and your stories sound really good. A great story doesn't need or have to have a lot of sex to be good book for me. Best wishes on more books and promotions.

Oh Dena, thank you so much for your encouraging words. I really appreciate them. All my best.

I couldn't agree more. Persistence and determination are essential keys to success. You are not alone in it. I guess we are holding each other's hands.

Hi Mona, helping each other is always the best way. Thanks for coming over.