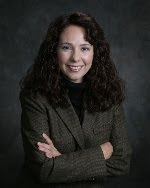 Trudie Abernathy is a little inelegant, and she’s never had much luck in love. To make matters worse, her thirtieth birthday is fast approaching and her sister, Lane, has decided to treat her to a makeover and a blind date. Trudie is about to protest, but then she meets the kind and devastatingly handsome Mason Wimberley. In spite of Trudie’s humble manner, Mason finds her attractive, funny and smart. But there’s one obstacle in the way of the budding romance: Lane suddenly decides she’s in love with Mason! Trudie has never been one to complete with her glamorous sister, even when it means giving up the things she wants. Will she be able to stay true to her humble self and find her hearts desire in the process?

Her first book came out in 1988 and it was at that point she considered herself a writer.

"It was a little book of poetry," she told me, "but it gave me a start and gave me the confidence to continue."

There are three elements that are basic for Anita when she's reading: does she care about the characters; does she want to keep turning the pages; does she remember the story long after she's finished it. When these three elements are met, she considers it good writing.

Her own writing has been influenced by three older writers, all classics: Ann Radcliffe, a pioneer of the gothic novel; Jane Austen; and Wilkie Collins, who is credited with writing the first full-length detective stories in English.

Anita told me that her writing space was "a total mess."

"I keep trying to get organized between books," she said, "and I do for awhile, but then during the process of writing my office goes all crazy again. I’ve given up on trying to be a neat-freak."

She has a nice big window in her writing area, however she likes to keep the blinds shut while she's writing. "Life outside is just too wonderfully distracting," she explained.

Some of her favorite things to do when she's not writing include going to the spa and having a facial or a massage. "I love to drift far away where no one can find me," she confessed. She also loves to go out to breakfast or lunch with a friend and on the weekends, she enjoys going to the movies or watching them at home, where she multi-tasks by bleaching her teeth, ironing clothes, doing her nails, and "other small ultra boring tasks," she said.

She's never eaten a crayon, but when she was a kid she ate petals off some of the flowers in the backyard of her house. "I guess they weren't poisonous," she told me, "because I'm still alive."

But the flower petals didn't even rate a mention when I asked her about the strangest thing she's ever eaten. That was reserved for the kangaroo she ate in a fancy restaurant while she was in Australia a few months ago. Her reaction to it?

"It's not anything I would ever want to eat again."

The kangaroo is also her favorite animal. "That's probably one of the reasons I don't want to eat it again," she said. "Also, the color, flavor, and texture was a strange experience. I don’t think kangaroo would be a big hit in American restaurants."

"Have you ever cried during a movie?" I wondered.

"Yes, big-time. I sobbed during Schindler’s List, and I filled an empty popcorn bucket with tear-stained tissues when I went to see The Joy Luck Club."

Anita shared that she's very much a morning person, getting up at 5:30 AM and going to bed at 9:30 PM. "But I really need some good coffee to wake up," she confessed.

Another confession from Anita—when she was in college she made a prank phone call to a guy she had a crush on. "There's a chance he figured out who was calling," she said. "Not sure. I guess silly prank phone calls were popular with college kids back in the 70s. Guess we had way too much time on our hands."

Finally I asked, "If you could wish for anything, what would you wish for?"

"I would love to have one of my novels made into a movie," she told me. "I know that dream is common for novelists, but I hope to make it a reachable goal within the next few years."

You can keep up with Anita on her website, http://www.anitahigman.com
Posted by Long and Short Reviews at 4:00 AM