TGIF, everyone! A super big THANK YOU to LASR for having me all week! What better way to end the week than to talk about heroes!

Alphas and Betas, I love ‘em both! The silent, brooding type. The demanding, controlling…needs to be brought-down-a-peg type. The no nonsense I’ve-got-a-job-to-do type. The good friend waiting for the heroine to notice type. And my favorite: the broken, deeply wounded, very cold hearted type, like:

Legend of the Fourth Moon 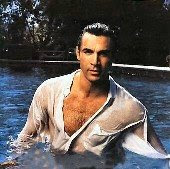 Here’s an excerpt from LOTFM/TMOG showing Daruis’s alpha side which picks up after the ‘kiss’ excerpt I’ve been posting on the loops.
~~~~~

How could he be so stupid?

Never again would his lips touch another. No woman was worth these feelings of guilt. He yanked his boots off and slammed them to the floor. Damn the council! Damn the chancellor! Damn his… Damn them all for forcing this curse on him!

But they had, and he’d lived with it for five years now. His gaze snapped to the princess. Hair messed, eyes round with innocence yet darkened with need. His gut tightened. Damn her, too! He jumped to his feet. It was her fault. If she’d stayed on Volanz, this never would’ve happened.

And these clothes, his gut clenched with rage. He hated them.

Hands grasping his collar, he ripped off his shirt, coat and vest all at once. Buttons flew in every direction, pinging off the walls and floor with a resounding tune of indifference.

Freed and unrestricted, he smiled.

“Oh, that was mature.” The princess shook her head of soft curls.

She tilted her chin. “You still haven’t answered my question.”

“Princess,” he replied pointedly. No kriggin’ way would he speak her name. Too personal. He unzipped his pants, hoping the act of undressing would cause her to turn and leave him alone.

“What did you do to me?” she demanded, hands on hips.

He should have known better. She drew closer, and other than a faint tinge of red to her cheeks, she didn’t acknowledge his unclothed state. He cocked his head, held her gaze and dropped his pants.

He raised a brow. “I didn’t think princesses knew that word.”

“I asked you what happened?”

He inhaled. Would she never let up?

Anger shaking his voice and hands, he yanked aside the waist of his briefs to reveal the brown mark adorning his lower abdomen.

Air, from her intake of breath, cooled his flesh, and his breathing stopped all together when her hand reached out and hovered over his Mark.

“That’s the…” she paused to swallow.

If you’d like to read more, LOTFM/TMOG is available HERE at The Wild Rose Press.

Now, back to our hero discussion. :-)

ALPHA MALE: Dangerous, almost ruthless, brilliant, proud, confident, motivated, charming when needed, cocky, always has a game plan and the capability to see it through. Typically the head of a multi-million dollar corporation, a Special Forces operative, a Navy Seal, cop, vampire, shifter or even royalty. He is usually gorgeous, very good in bed, but doesn’t want to be tied down…unless it’s a forced marriage book. He loves fiercely, fights fiercely, would make a great father, but probably wounded and emotionally distances himself from a woman who makes him feel too much. He has a few close male friends he would risk his life for, and many hidden layers that would take forever to peel back.

So much fun, not only to read, but to write.

BETA MALE: Charming, affable, good looking, confident, smart, great sense of humor, strong, solid family type. He’s a cop, doctor, veterinarian, fireman, works in construction, owns a restaurant or small business. He is perceptive, kind, responsible, decent, and more in touch with his feelings than an alpha male. He is a people person and puts others needs first. Down to earth and practical. Assesses what needs to be done and does it. He too, would make a great father. Very determined because he's responsible for the heroine. He is also good in bed but not promiscuous. A woman who cheated or lied may have hurt him. He does have a temper but is slow to reveal it. He is Mr. Nice Guy with plenty of patience.

He’s the perfect hero for a wounded heroine.

Lately, I’ve noticed there’s an aptly labeled ‘hybrid’ hero cropping up more and more in romances. He’s a cross between Alpha and Beta, with the best of both heroes in one. I’m all for that and made a ‘hybrid’ out of Jack ‘Dodger’ Anderson from my romantic comedy suspense, Meet Your Mate, the hero in the book from my prize pack give-a-way.

If you watch NCIS, you’ll get a real good glimpse of all three types of heroes. Special Agent Leroy Jethro Gibbs is your ALPHA. A strong, no nonsense Marine, deeply wounded, determined to bring down the bad guys, even if it means breaking some rules.

Special Agent McGee is the BETA. He’s affable, compassionate, smart, sticks to his convictions. Then you have Special Agent Anthony DiNozzo, the ‘Hybrid’. Handsome, charming, very good at his job like the ALPHA hero, yet funny, confident in himself and his Alpha boss enough to follow orders like the BETA hero. I enjoy each of them equally, and if one of the three were missing, I truly would not like the show as much.

To me, the Alpha, Beta and Hybrid each have a place in romance novels. I couldn’t imagine reading or writing without their unique characteristics.

Available now in both eBook and Print.

www.donnamichaelsauthor.com
Posted by Long and Short Reviews at 4:00 AM

Hey Donna!
I love my alphas, you know that. Can't write military romance without encountering a few uber-alphas. Though I've written beta and hybrid heroes too and I love them just as much.

Right now, I'm working on a sexy nerd hero and having lots of fun with it. So, yes, there is definitely room for any and all heroes in the world.
Cat

Well Donna, I like them all. They each have the right feel for different moods I may be in. If my life is especially hectic, I like the take-charge Alpha hero. He makes me think there are answers out there if I just stay deterimined to find them. Then the Beta man is perfect for when I want some really good romance. If I'm needing that deep emotional nudge to stimulate me, he is the man. Then if I want a light and fun read, I go looking for the Hybrid man. Basically, as you know, I'll read just about anything as long as it is well written. LOL

Hi Cat~Yes, most military heroes are alpha. lol And I must say, I love your men...I mean, heroes. :) I bet your sexy nerd is a bunch of fun to write. I can't wait to read it!

Hi Kim~I agree. Every type of hero fits in our reading moods. I choose my reading 'hero' to suit my mood at that time, too.

Have a good one,

I wrote about both alphas and betas. My alphas hide their soft spot very deep and won't let it show except under very spcial conditions, such a big love and worry about their heroines. My beta heroes have moments where they are alpha too, but they are easier to deal with, men who can laugh more frequently.

I love MEN! I do have a special place in my heart for Alpha males. How could I not when I'm surrounded by them? I'm prior military, married to prior military and we both work for the military.

I also love the Beta type that follows because it suits him at the time but isn't afraid to stand on his own.

Thanks. Your alphas and betas sound wonderful!