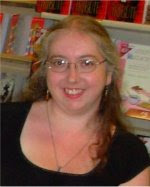 The Long and the Short of It is pleased to welcome Cindy Lynn Speer, author of The Chocolatier's Wife published by Drollerie Press.

I asked her to tell us a little about this book.

In the world that The Chocolatier’s Wife is set in, no one chooses who they marry, it’s all done through a spell, which chooses the person who you match best, are most likely to have a good marriage with. Unless you happen to live close to the person who’s been chosen for you, you’re not allowed to see them until the wedding day. William Almsley lives in the south, while his intended, Tasmin Bey, live in the North…which doesn’t please either set of parents since everyone knows that the people in the south are a bunch of barbarians and the people in the north are shifty and evil. But over the years, they send each other letters and form their own separate peace…a peace that is shattered when William is arrested for poisoning the town’s Bishop with a box of chocolates from his own shop. Tasmin’s family is thrilled, because she is freed of her obligation to William, but Tasmin, who has grown rather fond of William over the years, decides to travel to the south to find out what happened and help him.

Cindy's first published book Blue Moon came about because of a radio announcer. "He was talking about the blue moon that night," Cindy told me, "and I wondered what really happened during a blue moon. Of course, it had to be magic."

Cindy finished her first story and knew, at that moment, she was a writer. "It was a silly story," she said. "I think it was about a ballerina who was being stalked and it turns out to be her boyfriend (I was fourteen, after all…) but I finished it. And people liked it when they read it."

Even though Cindy calls herself a fantasy writer, primarily, she loves mixing elements of romance and even mystery into the story. Her characters usually lead the story. "I get an idea for someone," she said, "and I know the type of situation they would be in, and it sort of goes from there. Of course, sometimes it is just the opposite. The situation calls for a certain type of character."

As you can see, in some way the plot and characters form each other. "Not a lot," she confessed, "but a little, because the plot has to be the kind of thing the characters would logically find themselves involved with and vice versa. It's very organic, and a little edge of the seat, because the story sort of just comes as I write—caged by the general structure of the characters and the feel and the goal I have for the story."

I asked Cindy what, in her opinion, was one of the signs of good writing.

"People you can send time with," she said. "A great plot and a solidly written world are also essential, but the main character has to be someone you can somehow relate to...someone you wouldn't mind taking a car trip with. Reading is a journey, after all."

Cindy composes her journeys in a corner of her bedroom. "The desk is an old wood TV console," she described, "and I keep my hard drive and binders and such in the bottom. The top, right now, has a pair of Schleich Knights jousting, and there's a flowered vase with pens in it, and I have tons of bookshelves with my writing references nearby."

"What was one of the most surprising things you learned in creating your books?" I wondered.

"That they really are in the back of my head, all ready and waiting to be written down," she replied. "It’s a rare occasion that I’m actually thinking about what should come next; usually if I ask the question, the answer is there. Sometimes, when I’m really stuck on a book, I think, 'Well, it’s not written past that point, yet. I guess I have to wait.'”

On a personal note, her favorite pizza is something with a nice, thick crust, sausage, mushrooms, onions, and peppers. She admitted, though, "Since I work with college kids, and everyone has different tastes, usually we go pretty basic." And with that pizza, don't try to give her Pepsi. She can tell the difference and is a self-admitted "Coke-aholic," saying, "It's my main vice."

Cindy describes herself as "a sentimental idiot," explaining that not only does she cry in movies; she also cries during Hallmark commercials.

She also considers herself more of a night person, saying, "I recently realized that the only real objection I have to work is the fact I actually have to get up in the morning. I was born at night, and I have no trouble at all staying up until three in the morning. It’s too easy. Getting up, even at 7:00, which shouldn’t be so bad, is a terrible trial. When I was working as a freelance editor, I loved the utter silence of night."

Finally, I asked Cindy, "If you could wish for anything, what would you wish for?"

"To be a beloved author," she said, "to be someone that people really look forward to reading."

You can keep up with Cindy on her blog, http://www.apenandfire.com
Posted by Long and Short Reviews at 4:00 AM