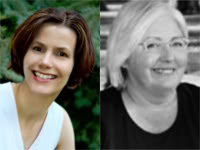 The Long and the Short of It is very pleased to welcome two old friends, Charity Tahmaseb and Darcy Vance, whose debut novel The Geek Girls Guide to Cheerleading was recently released.

Charity and Darcy have both been lifelong readers—loving stories and books. Charity would rewrite movies and books in her head (generally, she told me, because there weren't enough girls or girl power in the books and movies she saw), but it didn't occur to her until after her son was born that she could actually write down all those stories she had in her head. "Why it never occurred to me to do this before, I have no idea," she said. Darcy, on the other hand, had her first (very short) story displayed on Back to School Night by her first grade teacher. "My parents read it and gushed with praise," she told me. "That was the first time I remember thinking, 'Hey! This writing thing might be kind of cool!'"

Charity and Darcy first met ten years ago as part of an online writing group. They became critique partners and friends, then started writing together about two years ago. However, they've only met in real life two times, and the second was just a few months ago for the launch party for The Geek Girls Guide to Cheerleading.

The Geek Girl’s Guide to Cheerleading is about a self-proclaimed geek girl who, partly as a joke, and partly to support her best friend, tries out for varsity cheerleading and makes the squad. It’s the story of her season on the squad. As Darcy likes to say, it’s also the story of falling in love for the first time and being a good friend even when the other person isn’t being such a good friend back.

I asked them, "What comes first: the plot or the characters?"

Charity said, "For me, it's a bit of both, usually a character in a 'what if' situation," while Darcy admitted she used to be strictly a character first writer.

"For a long time I believed that if a writer understood her characters well enough, the story would grow from within them. I'd still like to think that but, more and more, I find that if I don't have a clear notion of plot my stories wander too much. I'm trying to become a more efficient writer and I suspect that paying attention to plot first, and maybe even outlining, (omigosh, did I just say that?) might be the path I need to take."

I asked Charity and Darcy about what inspired each of them to write their first book.

"You mean my very first book," Charity asked, "the one that won't ever see light of day (unless Darcy comes up with a way to turn it into a young adult novel)? My biggest motivation was writing a book I desperately wanted to read."

The premise for The Geek's Girl Guide to Cheerleading is based on something that happened to Charity her senior year of high school.

Charity said, "When I emailed the idea to Darcy, she sent this back to me: 'I will either steal your idea or kick your scrawny cheerleader butt if you don't write this.' Now that's motivation."

Darcy laughed and countered, "I seriously considered stealing Geek Girls when Charity had seemed to give up on it! And, though her cheerleader butt may be scrawny, I doubt I could kick it. Charity's tougher than she looks. I was inspired to work on the book with her because (1) I loved it from teh very first mention of the idea; (2) I couldn't stand the idea of Chariy pushing it under the bed or in the back of a closet." She added with a wink, "And (3) she let me."

Charity and Darcy each described their writing space for us.

"I don’t have a 'room of my own” or even a closet," Charity said. "My house has an open floor plan and my writing desk is pretty much in the middle of that. We turned the formal dining alcove into a 'library,' and that’s to my right. The kitchen is to my left.

When I write, I also hang out with the pets and the kids and generally speaking, it all works out."

However, Darcy said, "Now that my kids have grown, I do have a room of my own – but I almost never use it to write. I like to have my husband handy to bounce questions off so mostly I write at a desk in the living room. It’s glass and dark metal and holds my laptop, a candle, a desk lamp, a jar full of pencils, a vase of bamboo and a really cool tile a friend of mine gave me when Geek Girls was launched. It says: She believed she could so she did."

Charity and Darcy both still work full time so they don't have a writing schedule the same way many fulltime fiction writers do. Charity said, "I do what I can, when I can. I'll write during lunch, while my daughter is at dance or gymnastics class, on the weekends." Darcy agreed. "I either write or do something writer related every morning before I go to work. I also carry a notepad with me at all times so I can jot down ideas in spare moments. I try to do book promotion work for at least an hour every evening – but after a long day, it’s hard to maintain my focus."

On a more personal note, I asked, "Do you really really want a dog?"

"Dude. I already have the incredible shedding dog," Charity replied. "And with the amount she sheds each day, I can make a dog for everyone."

"Double dude," Darcy echoed. "We already had an 85 pound lab mix (who totally has my heart) then my brother moved in with us last fall and brought along his 50 pound semi-mutt. I feel confident that I can make a dog for everyone, every day."

They also have similar feeling about photographs. I asked, "Do you hate how you look in pictures?"

Charity concurred. "My goal in life is to always be the one holding the camera. I had to get my author pictures taken a second time because I was way too tense in the first set (that, and my agent thought I should show more cleavage)."

I told them, "You can erase any horrible experience from your past. What will it be?"

Charity said, "None. Here’s the classic geek reasoning: In Star Trek, Next Generation, Picard does just this, a wish granted from Q (an episode called "Tapestry"--yes, I know, geek alert, geek alert).

"After the wish is granted, Picard finds himself not the commander of the Enterprise but as some mealy-mouth second science officer in charge of mealy-mouth kinds of things. There’s a funny scene where Riker blows him off when Picard asks about potential leadership opportunities. (I recall far, far too much of this episode.)

"I don’t think you can remove those threads from your life and still be you."

"I don’t have a funny Star Wars allegory but I agree with Charity," Darcy said. "Even the absolute worst things in life bring gifts with them that you might not receive otherwise."

"What's a saying you use a lot?" I wondered.

"Ooh, here’s the chance to toss in my own geeky Star Trek reference!" Darcy exclaimed. "When my daughter turned twelve she started inserting the word ‘like’ into almost every sentence she spoke. It drove her dad and me crazy. We even resorted to bribing her to try to curb the habit. We offered to pay her for if she could say ten sentences in a row without a single ‘like’ in any of them. It didn’t cost us much. But, as time wore on, she rubbed off on both of us. Now I find myself saying ‘like’ way too often. My daughter, she’s like the Borg. Resistance is, like, futile."

"I often use the phrase 'going to town' when my daughter is working on some sort of art project, as in, 'Wow, you’re really going to town on that!'" Charity shared. "I never knew just how much I used it until the day she glanced up at me and asked, 'Am I going to town on this, Mommy?'"

Finally, I wanted to know the strangest thing they had each ever eaten.

Charity told us, "Puppy Chow. No, not the human variety snack food, but actual Puppy Chow, the kind you feed real puppies. It was one of those damned if you do/damned if you don’t situations.

"When you’re the new lieutenant and the section master sergeant offers you some Puppy Chow, which, oh by the way, he’s been snacking on for about fifteen minutes now, do you:

"1) Refuse the Puppy Chow? (Result: the section’s enlisted soldiers end up thinking: “The new lieutenant is a priss. She’ll never be one of us.”)

"2) Eat the Puppy Chow? (Result: the section’s enlisted soldiers end up thinking: “Wow. The new lieutenant is *really* stupid. We probably don’t want her to be one of us.”)

"In the end, I ate the Puppy Chow. Because that’s hardcore."

You can keep up with Charity and Darcy on their blog, http://thegeekgirlsguide.com/wordpress
Posted by Long and Short Reviews at 4:00 AM