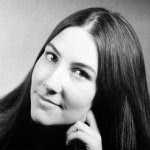 The Long and the Short of It is pleased to welcome Samantha Rhodes, whose book Passon's Professor was published by Midnight Showcase Fiction. She also has a poetry chapbook, To-wit To-woo, published under her real name, Peggy Landsman. "I didn't think Peggy Landsman sounded very romantic," she said as she explained her choice of using a pen name for Passion's Professor.

Samantha's journey to publication was not a short one. She began writing stories and poems as a child and still has copies of her first works. "Leetin and Corseo," a short story she wrote and illustrated with crayon drawings when she was about five, was a romance about a girl who is kidnapped by the King of China and imprisoned in a tower when she refuses to marry him. She is, of course, rescued by her true love.

A few years later, she wrote her own mystery story after reading dozens of Nancy Drew books. It was called "Rusty Renson and the Secret of the Ruby-Eyed Statues." Rusty had eleven sisters and a mother, whose names all began with "R."

Samantha said that her characters always come first when she's writing and the plot grows out of them. "They are what they do," she told me. "They have to exist before they can do anything." I asked Samantha to tell us about Passion's Professor.

"I was inspired to write Passion's Professor by an editor from Simon & Schuster. I saw her on a talk show one afternoon," she replied. "She was asking for romance manuscripts for the popular Silhouette Romance line. (This was back in 1984.) So I read a half-dozen Silhouette romances and then wrote mine. I loved the challenge. I had no idea when I started that I would be able to complete it. It was a wonderful experience to fill 250 blank pages. I wrote the first draft in longhand in a three-ring notebook.

"I got a literary agent in New York City in 1985. She loved the book, said it was like 'eating a box of chocolates.' But she was unable to sell it because at that time the romance market had slowed way down. In 2006 I revised the manuscript and sent it out to a few online publishers. The rest is history."

Readers of Passion's Professor have told Samantha they'd like to see it as a movie.

"Some have commented that they love my love scenes," she told me. "Others have said that reading it made them want to visit Berkeley, California. Some have told me that they love the ending, find it beautiful."

"The first happens when I'm busy, distracted, maybe depressed, or just in need of a break from writing. I call these my 'fallow' periods. I've experienced several prolonged fallow periods over the past several years, but at the end of them, my writing seemed to have improved.

"The second kind happens when I've been working on the same piece very intensely and need to distance myself from it for a while. Then I simply start working on a different project," she explained. "I like to have several projects going at the same time. That way there's always something I can do."

When Samantha's not reading, she has several other interests that keep her busy.

"In no particular order," she stipulated, "I like to read; swim—especially in the ocean, but a pool will do; go for walks; spend time with my husband; listen to music—especially classical, but my taste is very eclectic. My husband and I read out loud to each other before going to sleep at night. This is something I always look forward to. We've been reading the Lanny Budd series by Upton Sinclair, but now we're taking a break from that and reading Robert B. Parker's early Spenser books. We like watching movies together after work. We do not have a television. We borrow DVDs from the library and watch them on our computer monitor. I used to paint, especially in oils, but I haven't done that for a while. One of these days I have to get back to drawing and painting."

Samantha lived in Japan for a year, and shared with me she ate lots of raw seafood, including raw octopus and squid. "Once, I also tried some raw beef liver," she said. "I did not try raw horse meat—or any other kind of horse meat. I told my enthusiastic hosts that I had an allergy to it."

"What do you want to know about the future," I asked.

Samantha is a second-generation American on her father's side.

"My father's parents came here in the early 20th century from Russia," she said. "I have a copy of my paternal grandfather's conscription notice. He was supposed to show up to enter the czar's army sometime in 1917! He emigrated before then.

"I don't know where my mother's father was born, but her mother was born in New York City in 1901. On her birth certificate, she was listed as a 'black Jew.' That was a derogatory comment—on an official document! My mother's grandparents were from Romania, so I guess that makes me a third-generation American on my mother's side (or a two-and-a half generation if my grandfather was born in Romania)."

She loves thunderstorms, as long as she's safe inside. "Thunder and lightning are so exciting," she said. "And if I am outside just before the storm breaks, I love the feel and smell of the air. I've also had wonderful experiences being in the ocean when great big drops of rain were falling on the water, but the lightning was far away."

She admitted to me that she cries during movies all the time.

"Sometimes I cry along with everybody else when there is an obvious reason to cry. Off the top of my head, I remember crying during Little Big Man when the Hoffman character's young Indian wife gets shot. I've seen the movie more than once. The last time I saw it, I remember thinking to myself that I wouldn't cry again, but I did. I also remember crying during Apollo 13. When they've succeeded in returning to Earth and are finally walking down the tarmac, it's very moving.

"Sometimes I cry at things that nobody else cries at. Right now I can't think of an example in a movie, but I do remember (in 1969) crying at a song—the Beatles' "Why Don't We Do It in the Road?" My friends all thought I was nuts. To this day, I'm not really sure why I cried. Must have been some existential thing."

Unfortunately, she can no longer eat pizza. "I can no longer eat garlic, tomatoes, spicy things..." she shared with me, but when she could her favorite was Zachary's (in Berkeley, California) artichoke and pineapple.

Finally, I asked what advice she would give a new writer just starting out.

"Read more than you write. Read everything," she said. "Find the best works in every genre, even genres you don't think you are particularly interested in. And remember what Somerset Maugham said: 'There are three rules for writing the novel. Unfortunately, no one knows what they are.'"

You can keep up with Samantha on her website, http://home.att.net/~palandsman/samantha.htm
Posted by Long and Short Reviews at 4:31 PM