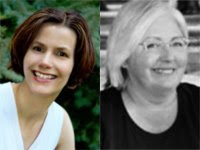 I know her stance on coffee condiments (real cream only, please), her preferred method of passing time during the daily commute (audio books), her favorite rock band (U2) and the names of her children, her husband, her mother and her sister. I even wrote a book with her. Yet Charity Tahmaseb and I have only met in person one time.

How is that possible? A dozen years ago I would have said it wasn’t.

Our lives should have never intersected. Charity lives just outside bustling Minneapolis. I live in rural Indiana. Charity studied Russian at the University of Wisconsin. I studied euchre, boys and disco dancing at a string of local colleges. She joined the Army after school, lived abroad, jumped out of airplanes and was terrifyingly close to the front lines in Desert Storm. I worked in an unemployment office, an agency for disadvantaged children and a mental health center. Which is to say, I’ve seen a few battles too, just none that involved actual artillery. Even our writing styles are different. Charity is a plotter. Me? Go Pantsters!

We became aware of each other more than ten years ago when we each signed up for a free online writing class and then joined an internet writing community. (Hello, Writers Village University!) I admired Charity’s persistence, her ability to bring a setting and characters to life, to analyze plots and to come up with unique and interesting concepts. Charity admired my…well, I’m still trying to figure that out, but I’ve been told I have a somewhat natural writing voice, and I am pretty good at finding typos.

We became fans of each others work, then critique partners, then friends, but I don’t think either of us ever dreamed we would collaborate on a novel. And then, through a series of twists in fate, we became co-authors.

It shouldn’t have worked. Our book, The Geek Girl’s Guide to Cheerleading, started as Charity’s solo project. When I got involved, we were trying to move the story from a third person narrator to first person, and to set a little bit lighter, funnier tone for the novel. At first, it was easy to tell the differences between our writing. But, as each of us added, or took away, or tweaked the chapters…something magical happened. We could no longer identify who had written what. Geek Girl’s Guide stopped being ‘Charity’s story with Darcy’s parts stuck in it’. Instead, it became our characters’ story.

If you think you would like to try collaborating on a novel:

1. Choose a partner that you genuinely admire, respect…and like. You will be spending a lot of time with your co-author.
2. Stash your ego in the closet for the duration of the project. It isn’t about you and it isn’t about her (or him). It’s about the book.
3. Examine your own strengths and weaknesses and understand your role in the project. Charity was the chief engineer of our novel due to her amazing plotting abilities. I was the “sparkly eyeliner applier” due to my generally goofy nature. The book needed both of us.
4. Communicate, communicate, communicate. Don’t let trouble fester. If you are frustrated by some aspect of the story or the process, talk it out. Chances are, if you’re feeling uncomfortable, your partner is too—and that’s counterproductive to good writing.
5. Enjoy the process! Writing a novel together is a unique and amazing experience. Have fun with it!

The Geek Girl's Guide to Cheerleading -- because high school doesn't come with an user's manual.
Posted by Long and Short Reviews at 4:00 AM

Sarita, thanks for stopping by and reading!

in the end you two fit well together with the writing; kudos to both.

One of the things that was so cool about reading the finished Geek Girl's Guide was seeing both your writing truly melded. I expected to pick out "Charity"/"Darcy" but you really played off each other's strengths and created something new and your own - as partners.