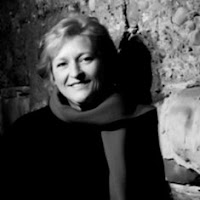 He lies there, stretched out on the window sill. Staring out at me through the plexi-glass window it is as though he waits only for me. Occasionally he stops to groom himself, slapping at an unruly tuft of fur with a sandpaper tongue. But mostly he sleeps until he hears the crunch of my boots on gravel. Then he stares. A wide yawn will occasionally break that unblinking watch. I wonder about his thoughts in the long hours of his reclining. I wonder about his ability to stay so completely relaxed on such a precarious perch. I wonder if he feels anything about his purpose for being in the barn in the first place. There are a sparing number of rodents since he moved so I suppose so. And yet, there he reclines as though nothing in the world around him matters. He just bats those white lashes, drawing them with sluggish indifference over orange eyes. Blink. Blink. Yawn. Stretch. He moves then. Only because he knows I am here. I—keeper of the food bin. Jumping from the sill, he pads down the aisle and parks his furred flanks in front of the food dish. An imperial meow informs me that he has waited long enough. He inhales the food as though he has worked voraciously for hours non-stop. And then he stretches once more, front paws shoved out far in front, rump pushed toward the ceiling, tail rigid and quivering with the exercise. Tracing his steps, he pads back down the aisle, launches himself up the wall and settles back onto the sill. As I leave the barn he is where I first saw him, stretched out on the window sill. Staring and blinking.

Donna Fawcett is a creative writing instructor at a local college in Ontario, Canada and an award winning writer. She writes romance, mystery, suspense and thriller novels. She is also a freelance writer and has been published in national and international magazines. Donna speaks at conferences and shares her love of writing with elementary and high school students as she involves them in classroom writing workshops. Her books Fires of Fury (an e-book by Awe-struck books), Redeemed, The Adam & Eve Project and Vengeance (Word Alive Press – print books) can be found at http://www.authordonnadawson.com or at your local book store.