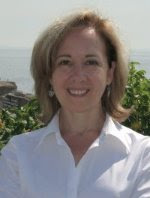 The Long and the Short of It is pleased to welcome Virginia Kantra, whose latest book in the Children of the Sea series, Sea Lord, was released last week by Berkley.

The Children of the Sea series is based on the haunting Orkney ballads about the selkie, who can take the form of seals in the sea and come ashore as beautiful naked men and women. Virginia used another song, a sea shanty from the 1700s to connect the stories in the series:

My father was the keeper of the Eddystone Light And he married a mermaid one fine night. Of that union there came three . . .

The father in her series is a lobsterman in contemporary Maine. And the “three” are the grown up Children of the Sea:

Caleb, the soldier, who returns from the desert to fall in love with a woman from the sea (Sea Witch, Berkley, July 2008); Dylan, the loner, who must choose between the freedom of his mother’s kind and the bonds of mortal love (Sea Fever, Berkley, August 2008), and Lucy, the dreamer, whose heart and fate are tangled with the sea king’s son (Sea Lord, Berkley, May 2009).

I asked Virginia to tell us a bit about this latest story. She said,

Poor Lucy really has issues. I mean, abandoned by her mother, raised by her alcoholic father and her ten-year-old brother... She’s finally making some kind of life for herself when she attracts the attention of Conn ap Llyr, prince of the selkie and lord of the sea. All hell breaks loose—literally. So the tension that was in the first two books between land and sea, between the exotic, sensual merfolk and the down-to-earth islanders of World’s End, is back in spades.

I asked Virginia if she starts first with a plot or characters.

"There’s a great quote from E.L. Doctorow that I keep by my computer," she told me. "Writing a novel is like driving a car at night. You can see only as far as your headlights, but you can make the whole trip that way. Of course, I always feel that I should have a map.

"I start with a character and a situation—say, a soldier coming home from Iraq (Sea Witch) or a prickly single mom working in her own mother’s restaurant (Sea Fever). I do write a synopsis, which I hardly ever adhere to. I use note cards which I shuffle around, add to, and discard with sometimes scary results. I also keep this giant three-ring 'series notebook' on my desk for all the maps and place descriptions, character names and pertinent details. Only of course I forget to put things in there, so it’s pretty much useless except as a security blanket."

Virginia told me she had a very active fantasy life as a child.

"Take that any way you want," she said. "I wrote plays for the neighborhood kids to perform and stories to bribe my younger cousins to bed."

Because of that, she thought that maybe she would be an actor when she grew up.

"It's kind of like being a writer," she explained. "Obviously, I’m drawn to jobs where you spend time talking to imaginary friends and getting rejected. But it wasn’t until my youngest child started school full-time that I wrote seriously for publication."

Now, her writing day starts off with her making notes in long hand—snippets of dialogue, action that will drive the next scene—and the rest of the day fleshing out those notes on the computer.

I asked her, "Do you have any strange handwriting habits?"

"When I was a fresh-out-of-school English major working as an administrative assistant, I learned speedwriting," she replied. "So now when I’m making scene notes in a hurry, I use this odd, sloping shorthand."

She also does a bit of multitasking.

"My poor kids had to get used to me wandering around the house, folding baskets of socks and holding conversations with imaginary characters," she confessed, "but hey, they got clean socks."

Virginia shared with me that, with this new series, she's hearing from a lot of young women in their twenties and the common theme is they really want to believe in love.

"They tend to like Margred (the selkie heroine of Sea Witch who comes ashore looking for sex), because she’s 'just like a guy,' but they want to believe in more than hookup sex," she told me. "Whatever their own experience has been, they want intimacy. They want romance. They want to be valued for who and what they are. So when I was writing Lucy’s story (Lucy, the main character in Sea Lord, is twenty-four), I felt like I was writing to them and for them."

This led to the hardest part of writing her book, because she worked really hard to get the emotion on the page and to be honest. She feels that honesty in what you see, in what you feel, and in what you say is the most important element of good writing.

"If you can see your settings and your characters clearly and describe them accurately," she said, "if you care about them and about what you have to say, then the reader will care too."

As an aid to knowing the characters, Virginia uses the Enneagram personality type system in her writing, which catalogs both virtues and faults. And Virginia, herself?

Virginia's heritage is Italian and Eastern European, she told me, a fact that may have helped with her overseas sales.

"Maybe because my name, Kantra, is Russian, my books do really well in places like Estonia and Russia," she shared. "The woodcut illustrations for the Russian edition of Sea Witch are absolutely gorgeous!"

And, in case you wondered? Her favorite thing to make for dinner is reservations!

She and her family lost their beloved, aging Golden to cancer a few years back. Since they've been traveling a lot, they haven't done a serious search of shelters for a new dog, but she told me, "We're finally ready to open our hearts to another dog now." They are going to have to be careful about introducing a new family member, however, because they also have two rescue cats.

Finally, I asked Virginia what advice she would give to a new writer just starting out?

"Not to accept too much advice," she said. "There's no 'right' and 'wrong' in writing fiction; there's only 'works' and 'does not work,' and each writer has to discover what works for her. I do think it helps to read widely, in and outside your genre. And to write every day."

You can keep up with Virginia on her website, http://virginiakantra.com/
Posted by Long and Short Reviews at 4:00 AM