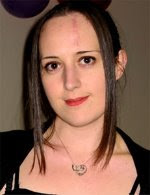 Felicity told me she stumbled into writing, but likes to think of it as natural progression.

"I’ve always been a creative person," she said. "Most of my family are in some way or another, but it was mostly directed at drawing and that side of the arts. I’ve read a lot of books in my years, most of which were when I was much younger. Back then, I was reading classic romance novels such as Jane Eyre, Persuasion and North & South, alongside stories by Edgar Allen Poe, Bram Stoker, Mary Shelley, and H P Lovecraft. I think that’s where my paranormal romance trend unwittingly began. A few years back, in 2005, a friend of mine convinced me to take a shot at writing original fiction and since then I haven’t really looked back. I’ve written stories in all genres, but always come back to the paranormal. I’ve always dreamed of vampires and demons and all things fantastical. I think that genre is where my heart lies."

She's very plot driven and always has at least a basic outline of the story. With her longer novels, she works extensively on the plot to make sure she gets all the right twists in there. "I spend a lot of time thinking things through before I begin writing so there are minimal interruptions once I’ve found my flow," she told me. "As for characters, I write everyone a little mini-bio and do a lot of exercises to get into their heads. I spend the most time with the hero and heroine, but the secondary characters and, of course, the bad guy gets air time in my head too."

Once she has her plot and characters, she normally let them stew and simmer for bit. She thinks this is an important process of her writing style, especially if there is extensive world building in connection with the story. "When a story is percolating, ideas about the plot or characters will come to me at any time of day or night," she said. "I’ve always got a notebook or three on hand to write the little gems down in. I have books full of notes on a series I’m planning right now, and I’m still adding more to it all the time. I think time is critical. You can’t rush into writing the story. The longer it sits the better. It’s the only way to get the best out of it and the characters."

In some of her books, the characters have come first. "They'd just barge into my head and announce themselves," she shared, "and then their story would follow."

She's always working on multiple projects. She's recently finished the second draft of Winter's Kiss, the next book in the Vampires Realm series which is scheduled to be released this fall. "It's a totally different type of story to Seventh Circle," she explained. "While Seventh Circle is romance driven, there’s a strong plot that makes it more like the first books of the series, the Prophecy Trilogy. It’s more of a 50/50 split between twisting, dark plot and the romance. Winter’s Kiss, on the other hand, is more of a romance. The plot is still very much there, but it’s the romance that drives the story, the characters. I really like it and I hope that readers will enjoy it too."

I asked her to tell us a bit about Seventh Circle.

Seventh Circle is the next novel in my Vampires Realm series. The series books are only tied together by the world, rather than the storyline, so most books stand alone, or just have characters or incidents that cross over. The hero of Seventh Circle, Lincoln, was introduced in the third Prophecy Trilogy book, Prophecy: Dark Moon Rising, where the heroine of that story healed him. Lincoln is a vampire with a problem. He’s caught up in a prophecy, a contract between his lord and the Devil himself, which will see him die if it comes to pass. He’s on the run, searching for a woman who, according to a vision of his future that three witches saw, will save him. His problem? She’s a member of Section Seven, an elite vampire hunter organization. Lilith has powers too similar to a vampire’s for comfort and knows nothing of her parents. She’s a hunter raised by Section Seven and has sworn to eliminate all demons. When she meets Lincoln and is told that he’s a paying client, she can’t believe her terrible luck, or the fact that she’s attracted to him, a vampire. Both fight their feelings but in the end they prove impossible to resist. Lilith is drawn into Lincoln’s world as she discovers things about her and Section Seven that shatter her own world. And in the end, she must find the strength to accept her feelings and face Hell itself to save Lincoln.

She's also in the planning stages of a new seven book series and two novels, not to mention a short or two.

Even with all this, she found she couldn't answer the question, "When did you first consider yourself a writer?"

"I think it came on gradually or hasn’t happened at all yet. Perhaps I’m still waiting for that epiphany," she told me. "I didn’t start out with the desire to be a ‘writer’. I dabbled here and there, a little fanfiction and then progressed (was cajoled until I surrendered) into writing some original fiction, and then it just grew from there. At some point, it became an obsession and I knew that I was never going to be free from the urge to write and create. I love writing. It’s my passion. Anyone who knows me knows that when I’m passionate about something, I give it my all. I’m still learning, growing, and one day I hope to be able to turn around to my friend and say ‘yeah, you were right’ and thank her for the push and all the support."

Felicity shared with me that the hardest part of writing is letting go at the end. She explained, "There comes that point when you hit the downward slide and you know the end is coming. At that point, it’s so easy to give up because you don’t want to close the book, figuratively speaking, on your characters and their story. It’s hard when you’ve spent so much time with them to write those final words and part ways with them. I find that I can’t do it, so I have a head full of characters who want sequels. I satisfy them and myself by writing drabbles for them (little 100 or 200 word moments), some of which I post for readers, others which I keep secret. It’s never easy to say goodbye."

On a personal note, I asked Felicity about the strangest thing she's ever eaten. "Probably a marble!" she said. "You know what kids are like. I’m sure it’s still rattling around inside me. Besides that, I had green tea and plum mochi in Japan in autumn 2006. Mochi is a glutinous sweet treat made using rice. It looked like a green egg with a deep purple centre that was revealed when I bit into it. It tastes damn good though! Just looked a little odd."

She's also a "taste the difference type" when it comes to Pepsi and Coke. In fact, she told me, "I can even taste the difference between Coke in different countries! I used to be Pepsi orientated but switched to the dark side that is Coke, and then to diet Coke. Favourite flavor is Diet Cherry Coke. I’m addicted!"

Finally, I asked her if she could wish for anything, what it would be.

"The same thing that I always wish for—a good long life with my husband and family, full of love and happiness," she said. "I’ve wished it so many times in so many ways. On stars, on ema tablets (flat pieces of wood at shrines in Japan where you write a message to be read out to the gods) and whenever a wish is called for."

You can keep up with Felicity on her blog, http://vampiresrealm.blogspot.com .
Posted by Long and Short Reviews at 4:00 AM