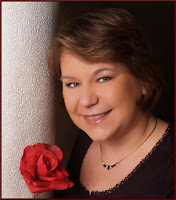 First I’d like to thank LASR for giving me an opportunity to chat with you! I’m Caridad Pineiro, a USA Today and NY Times Bestseller who has written of over twenty novels of contemporary romance, women’s fiction, paranormals and romantic suspense. My current releases are Honor Calls and Fury Calls from the popular THE CALLING Vampire series from Silhouette Nocturne. In November 2009 I will have my first paranormal romantic suspense single title release – Sins of the Flesh – from Grand Central Publishing.

You’ll notice I said “has written” in that bio because in the process of writing all those different types of books, I’ve learned that what I love to do the most is paranormals and romantic suspense, or a blend of those two. I totally enjoy the action/adventure part of romantic suspense and the paranormal elements have always appealed to me.

People often ask me what made me decide to delve into the world of vampires and I guess you could say that I was going through a dark phase in my life and writing something which matched that mood appealed to me. Plus, when I was younger, my family would regularly watch horror movies together and the vampires were always the scariest to me, but also the most interesting.

Going dark by writing stories about vampires gave me the opportunity to get behind the façade of eternal life and explore whether or not that life is as grand as it seems. It also provided me with the ability to establish who the person was before they became a vampire. Who the character was in their human life has always been especially important to me because the power granted by becoming a vampire pushes all those human traits to the extreme.

By digging that deep into the character’s life and motivations, you can craft characters with whom readers identify on various levels. Plus, such interesting characters require an equally compelling plot in order for the characters to confront their inner conflicts and hopefully have their eternally happy-ever-after.

In Fury Calls, the vampire hero is a reluctant one. He’s had too much misery in his human life and just wants to coast through life eternal. Enter the heroine and a very loathsome villain. In order for a happily-ever-after, the hero has to confront his past in order to save not only the heroine, but a number of his friends in the vampire underworld. I love that he’s a hero who has to find himself in both humorous and very emotionally touching ways.

In Honor Calls, my e-novella from Nocturne Bites, the hero is calm and reserved. As an FBI Assistant Director in Charge, he has always functioned by following the letter of the law. He has been honorably discharging his duties until the day he runs into a vampire slayer who’s now challenging what he knows to be the right thing to do.

I truly love exploring the complexities of the characters’ inner demons which are oftentimes much more interesting and much scarier than the vampires they have become or which they encounter lurking in their human worlds.

I hope you will drop by to visit me at caridad.com or thecallingvampirenovels.com and check out some of the free reads and other goodies that I have on the site for you!

Thanks again to LASR for allowing me to share some time with you this week.

Note: For a chance to win one of three prizes from Caridad: an autographed copy of Soldier's Secret Child, autographed copy of Moon Fever, or a Sins of the Flesh T-shirt, CLICK HERE and answer the question on her spotlight.
Posted by Long and Short Reviews at 4:00 AM

Hello Caridad! Just wanted to let you know I enjoyed your interview!

I think the best thing about "vampire heroes" is that they can be dark and have past issues and we accept it better because hey, their not human. I don't know, maybe it's just me, but I notice myself more accepting of a major flaw if it's someone who hasn't been human for a while, if ever. :)

Hey caridad, just wanted to say that you sold me on to try out your books for their paranormal elements.

Your Calling series is calling me,
I guess I'll have to go back to
pick up that copy of Fury Calls
that I saw at the Store! Talk to
you later!!

Hi Cariday, great post. I have never read any of your Calling series, but it sounds like something I would love to read. Thanks for sharing.

Hi Caridad! Loved the post!
I hope you have a Happy Birthday and you have a great time celebrating it during this birthday bash week!

nice interview.
some times i tend to forget you was a lawyer ,:)

Caridad,
I am here to wish you a very happy birthday and hope your birthday is a joyous occassion. I also hope the rest are joyous as well,
Tracey Taylor

you are all over the place today; have a happy birthday and a great day.

Hi Caridad! I think it's really interesting to look at what the vamps were like when they were humans. It can definitely help understand their motivations. I'm really looking forward to reading more about Blake and the e-novella sounds great too.

Books with complex caricatures draw me in and I always want to go the the next book.

I can hardly wait to read Honor calls and Fury calls, I absolutely love the previous Calling books

I love the combination of romantic suspense and paranormal!

And a very Happy Birthday, Caridad!

Congrats on the release of "Fury Calls" and "Honor Calls." Happy Birthday.

Honor Calls sounds like a really interesting book. What a way to come face to face with your ethical beliefs!

I like the fact that your heroes are not super creatures. It makes them seem more real.

Good post. Finding your genre (or genres) seems like one of the most important things for an author. Not everyone can do vampire stories well, just as not everyone can do historicals. Keep up the good work! Happy Birthday!

I have been a fan of yours since I discovered your first calling books in the library. You portray the angst of dark heroes so well. Vampires used to be my greatest fear--after all, they hid in the closet! But the human element you give to your vamps makes them vulnerable---and lovable. Although I'd never want you to go through another dark period in your life, I do hope you keep producing these wonderful heroes.
Julie

Those darker human qualities of your characters is exactly what makes them so wonderful and real.

It's amazing to me to see the proliferation of vampire fiction. They were always my favorite "monsters" (dating back to "The Monster Squad" TV series in the '70s), and as Stephen King observed in his non-fiction exploration of horror "Danse Macabre," they're the sexiest, too. It just took a while for the rest of the world to catch up. The South Beach Chicas series sounds adorable, too. Lucky you, getting to visit Miami for "research." I don't drink often, but the mojito recipe sounds very cool and summery!