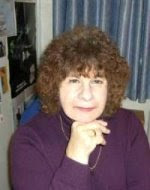 The Long and the Short of It is pleased to welcome Hywela Lyn, author of Starquest and its soon-to-be-released sequel, Children of the Mist. She told me that she's loved writing all her books, even those unpublished or those needing to be completely revised, but Starquest is definitely her favorite. "I started off with a dark, brooding hero and produced a feisty, but sweet natured heroine for him. Then I found a second hero, blond-haired and gentle but brave and determined, who refused to stick to the supporting role I'd given him and became far more important than I'd originally intended." She added, "As you can see, I became very fond of my characters; they are still with me and Starquest will always be my favorite."

Hywela has made up stories in her head since she was a small child and would act them out in bed before going to sleep. "I loved reading," she said, "and would re-write stories if they didn't end as I wanted them to, or I grew so fond of the characters I wanted to have more adventures with them."

She has had several short stories published in magazines and book anthologies, but has found her true love is writing novels. "I wrote a novel when I was about nineteen," she told me, "but it wasn't until a few years ago that I realized novels were really what I enjoyed writing most and made a serious attempt to get published. I love the freedom to expand characterization and plot which a novel gives the author. I think it's much harder to write a short story."

When Hywela isn't writing, she loves to be outside. "I have a rescued dog and two horses, although unfortunately the horses live rather a long way away from me," she said. "I like to take long walks with my dog and, of course, ride. I lived in Wales most of my life and took part in endurance riding events in the mountains, which gave me the inspiration for a lot of the settings of my books. I don't ride as much as I used to, since an accident which resulted in my having to undergo a hip operation."

Even though she now lives in the English countryside and doesn't find it as wild and mysterious as Wales, she still loves being with her horses and caring for them. She usually includes an animal of some sort in her stories, because she thinks people can learn a lot from animals. She's always owned dogs and hate the thought of being without one. She admits that they are a big responsibility and would never take one on if she couldn't devote the time and money needed. "After my last dog died at the age of fourteen and a half," she said, "I waited for two years, until I recovered from my hip operation and was able to give one the exercise necessary to keep it fit and happy. Then I went to an animal sanctuary in Wales called Ty Agored, which means 'Open House.' I've known them for a long time and my sister has had several cats from there. I've adopted a little Jack Russell called 'Bouncer.' He was badly treated before he was rescued and had a broken hip and pelvis which had been allowed to heal without veterinary attention, so his little back legs are a bit crooked and he's on permanent medication. You'd never know there was anything wrong with him to see him play and run around though. He's the sweetest nattered little dog you could wish for and I never fail to marvel how forgiving animals are after being abused or neglected by their previous owners."

As much as she enjoys her dogs, however, she has to confess that her favorite animal is the horse. "I love all animals, and dogs are my second favorite animal, but I've loved horses since I was a small child, although my family wasn't particularly horsey," she said. "I worked at the local stables during school holidays to earn rides and saved up for five years after I left school to buy my first horse. I now have a paint mare called Flying T'pau and a jet black Welsh Cob called 'Harry' - his show name is Pentrepiod Sovereign. I ride 'Western' style because I feel it is much kinder and more relaxed than the English style which I learnt when I was a child. Horses are strong, beautiful and intelligent creatures, and for me, there is nothing to compare with the feeling of galloping flat out with the wind in my face, feeling the strong muscles of the horse beneath me and seeming to be one with the animal. They demand a lot of time, but they're worth it."

I asked Hywela what one of the things was she had learned in creating her books.

"I am constantly surprised," she admitted, "at how the characters can take over and send my stories in directions I'd never intended. Usually they know best, although sometimes I have to be a bit firm and tell them to stick to the plot. Most of the time it's good to let them lead the way. Sometimes they can reveal things about themselves that I would have never guessed when I started out, and occasionally a minor character ends up playing a much more important role."

On a personal note, I asked Hywela if she'd ever cried during a movie. "Often," she admitted. "Everything from Gone With the Wind to Bambi. If there's a sad ending-- or sometimes a happy ending after a tragedy-- if an animal gets hurt or killed, or the heroine loses her feller, that's enough to make me cry like a baby, much to my husband's amusement. He looks at me and gives an exaggerated sniff. 'That was a lovely film; I did enjoy it,' he says before I can get the words out!"

She's also a night person, by nature, because she admits to not being at her best until after noon. Because her husband is the opposite, however, and has to get up at 5:20 in the morning, she's trying to change the habit of a life time. "My body clock is gradually adjusting," she told me. "I still stay up until the early hours if he's away, though!"

Finally, I asked Hywela what advice she would give a new writer just starting out.

"Read as much as you can," she said. "Try and write every day, and try to make sure that your spelling, punctuation and grammar is as correct as possible to create a good impression for an editor. Above all, never give up and don't be discouraged if you don't succeed at first - even the most famous authors have collected rejection slips, so keep trying. If you're really keen to be published, persistence and determination will pay off in the end."

You can keep up with Hywela on her blog, http://hywelalyn.blogspot.com/
Posted by Long and Short Reviews at 4:00 AM