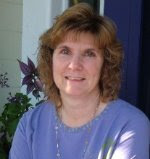 The Long and the Short of It is pleased to welcome Cindy Davis, who has two books coming out this month: the print edition of A Page from the Past and the first book of the Desert Magic Trilogy, Healing Magic, co-written with John Richters.

She is a busy lady, because she also has a book coming out in March--In a Little Murder. In this particular book the plot came to her first, she told me. "A man on a tour boat is killed--only six other people there, and none has blood on them," she said. "Your typical closed-room murder."

That isn't the case for all her books, however. When she wrote Voice from the Ashes and Final Masquerade, it was characters she wanted to explore further. On the other hand, she said, "In Lethal Dose of Love (not yet published) it was a town. As we drove into it, I was struck by an aura."

She shared that she's currently reading Away by Amy Bloom, but that her reading tastes are very eclectic, so she doesn't have one favorite author. "I like Lee Child, Sandra Brown, Jodi Picoult, Barbara Kingsolver, and a host of 'unknowns' and 'classics'," she told me. "Since I'm an editor, I get to see many who never even end up published. The book I return to more than any other is Gone with the Wind. It's rich with details, plot and multi-faceted characters."

Cindy is currently working on a project that has been a long time in the works. "First, Cold as Ice was a mystery. And, it just didn't work," she said. "I put it away for four years, took it out and tried to rewrite it with a stronger plot. Still nothing. Then, a year later, I realized I'd been focused on the wrong character. Rather than telling Devon's story, I needed to go back fifty years and tell his mother's story—as straight fiction. Sometimes if you get stuck on a story—try refocusing."

Cindy writes in a cozy small office on the first floor with, she says, "a nice view of a field that sometimes has deer, moose, or bear. There are plants on shelves across the windows and a huge aviary in one corner. The room is full of twittering and chirping. The treadmill gathers dust, but looks good when people come."

Cindy is generally at her desk by 5:00 in the morning and is still there frequently until 8 or 9 PM, six days a week. "I work on my won stuff first," she told me, "because it's when I'm most productive. When I run out of steam, usually between 10 and noon, I get dressed (heaven help the person who comes to the door before that—bedhead attack!) Then I do errands. After lunch, I'm back to work on editing."

When I asked her if she was a morning or night person, she answered, "Both. I am up by 4:30 most mornings, and don't go to sleep until around midnight. I am productive writing-wise in the morning, and love the Red Sox and/or Celtics at night."

On a personal note, Cindy shared with me that if she could erase any horrible experience from her past it would be the day she discovered her first husband was cheating on her. She was three months pregnant at the time.

And, she loves thunderstorms. "I love the yellow cast the air gets as a storm's moving in," she said. "I love the sky's hundred shades of grey during the storm. I love to watch the jagged bolts of lightning and feel the rumble of thunder inside my chest."

She can also tell the difference between Coke and Pepsi. "I don't like Pepsi," she told me. "It's too sweet and goes flat too fast."

And, if she could have anything she wished for, it would be for her book to be on the best sellers list.

Finally, I asked Cindy what advice she would give to a new writer just starting out. "Write as often as you can," she said, "and be prepared to rewrite—very little is good enough the first time around. Join a writer group; try to find writers more experienced than you are. And, listen to what they say."

You can keep up with Cindy on her website, http://cdavisn.com .
Posted by Long and Short Reviews at 4:01 AM

Cindy, I love your books and I am sorry about how you found out your husband was cheating on you! His loss girlfriend! I love that you have so many different books out and you may just have that best seller one day!