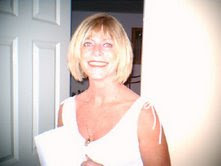 The Long and the Short of It is very excited to have Charlotte Chalmers with us this week. I thoroughly enjoyed interviewing this witty woman and reading her work. She told me, "I’m a working mum and, dare I say it, a writer!!! I work in financial services, my dream to pursue a career in art having been put on hold by early marriage (which came with a mortgage as well as a man attached!), until I found an outlet in writing.

"I’ve now been writing for a rather long time (ahem) and I live in the small town of Droitwich in the UK, where I strive to stop my witty son typing – THE END – halfway through my manuscripts and to keep up with the demands of my three rescue dogs."

Charlotte was very excited when she was able to get her very own writing space. Until then, she'd worked in every room in the house...anywhere she could find a space: bedrooms, bathrooms, spare rooms, dining rooms. You name it, she's probably written there. Then she took her conservatory over as her office. "[A conservatory], for those who don't know, is a room designed to entrap the warmth of the sun as it is made largely or entirely of glass. Sounds good, doesn’t it, until one realises one is not a cactus or a sunflower, and extreme heat leaves one rather wilty. Also, it’s terribly difficult typing with purple feet in the winter, as it would be!"

Another drawback to working in the conservatory was it made things difficult for her three-legged dog, Sadie. "Sadie (who lost a front leg to cancer and whose back legs are also now a bit wobbly, bless her), keeps trying to find me," Charlotte said, "and slips on the tiles on the kitchen floor, or falls over my other two dogs. So, I am now the proud owner of a writing bureau, which houses my laptop perfectly (the printer I shut in the drawer) and I have set myself up in the living room. Sadie has her own armchair, so, you might say, it’s a comfortable compromise."

Charlotte's The Madness of Celia Summers is a highly entertaining read and I asked her about some of the authors who had influenced her writing. "Though I enjoy a good tearjerker as much as the next person (and why not? It’s therapeutic!), I always feel I need to bring humour to my writing, so obviously I enjoy reading romantic comedy," she told me. "I’m born and bred in the UK, so I’m not sure whether everyone will have heard of these talented authors but I particularly like Marian Keyes, whose first novel Watermelon made me hoot, despite the diabolical predicament the heroine found herself in, as have her subsequent masterpieces.

Cathy Kelly (an Irish Author, as is Keyes. I think I’m attracted to their warm, quirky sense of humour) is a firm favourite. Her books are absorbing and her characters, quite simply, flesh and blood. Catherine Alliott is witty and hilarious, as is Kathy Lette, whose Mad Cows and Foetal Attraction are responsible for getting me hooked on humour. Her work is described on her website as ‘read at your own risqué,’ which I think sums it up admirably. She’s brilliant!

"I have to say though, that it was our very own Helen Fielding who finally made me put fingers to keyboard. To create a character as quirkily endearing as Bridget Jones, now that would be an accomplishment. Truly the birth of a legend."

Charlotte has assured me her strangest habit is "adopting disadvantaged rescue dogs!" and to prove it, she told me about her three dogs. "I have Sadie, a three-legged dog, whose back legs have gone wobbly, which makes her a one-legged dog, I suppose, and the proud owner of a doggie wheelchair. Then, there’s Snoops, a midget Jack Russell, who’s blind, and gone from fearful and peeing himself, to full out feisty, as Jack Russell’s tend to be. And, finally, Max, who’s supposed to be an OAP (old age pensioner), but has the agility of a six year old when running…in the wrong direction. So, I suppose that makes me the world’s biggest dog lover, or mad."

When she's not rescuing dogs or writing, Charlotte likes to read. I asked her to share with us what she's reading now. She's reading a lot!

" Simple Promotional Tools For Every Author " by Pamela S Thibodeaux – an excellent concise guide to effective Internet marketing for authors.

"Alvarado Gold" by Victoria Pitts-Caine – a Christian Romance Adventure, combining family saga. It’s the story of Addie Brown’s attempt to unravel a family’s secrets, whilst wrestling with a secret of her own, which is intriguing, richly written and a very satisfying read.

" The Awakening" by Rynne Raines – a short story of ghostly goings on which is gripping. To quote Rynne’s intro to the book: THE AWAKENING is a story I would read over and over. I’d recommend it to anyone who enjoys love stories that capture all the five senses. It’s the kind of fantasy you can’t run from once you’ve read the first page. ~ Tanya Snow—Author of GHOST OF MY PAST."

Charlotte also had some other books she wanted to recommend to our readers:

" Thin Ice" by Liana Laverentz - This book is beautiful. It's serious, yet sensual. Heart-wrenching, but humorous. It touches on some sensitive issues, which many women will be able to relate to, and handles them beautifully. A must read, and deserved winner of the NJRW Golden Leaf Award.

"A Funny Thing Happened on the Way to Your Wedding" by Cindy K Green – a sweet and funny wholesome romance, which I recall often with fondness.

"I’ll shut up on that subject now, which I could go on and on… Um, okay, could I briefly just mention another two that are well worth reading…

"Ring Shy" by Kelsey George – If you love animals, in particular dogs, this really is a must read. There was one line in there that made me blink in surprise, laugh out loud and want to cry all at once: Chinook was bald! You have to read it in context, but it’s well worth it.

"And, last but not least, Ten Things I’d Do for a Cowboy by Donna Michaels - It’s beautifully written, with details about the work the ranch does so skillfully woven in, it makes for a realistic heart-wrenching romantic read with a huge smile factor. Loved it.

I asked Charlotte what was the hardest part about writing her book. Without delay, she said, " Submitting it! Seriously, you don’t just write a book and get it published in today’s extremely competitive environment (unless your very lucky and immensely talented, or both) without heartbreak and rejection. I’ve had my fair share. Often the rejection can be in the form of positive criticism, which I always try to use (once I’ve stopped sniffling and cursing!). Standard rejection letters are the worst, when you’ve poured your heart and soul—to say little of your last ounce of energy—into a writing project. I have been invited to London on three separate occasions. The first time a leading agent had me convinced I had a bestseller. When it didn’t turn out to be, that very nearly had me hanging up my keyboard, or myself. But, I pulled myself up by the bootstraps, and got back on that old horse. You do if you write. It’s in the blood, even if does all sometimes seem too hard. I won’t go on about my other forays into the literary hub of the UK. I got lost. I got upset. I didn’t get published. But I’m still here, with a tale to tell, as are many other authors.

"Obviously, time is also a problem when it comes to writing. Let’s face it, it doesn’t pay the bills, unless you do get that bestseller…wistful sigh, so most authors have day jobs and families and…mental breakdowns! Sometimes, don’t you just wish that muse would go away?"

We're glad Charlottte's muse hasn't gone away. If it had, we wouldn't have The Madness of Celia Summers. Charlotte told me that, while she likes writing humorous stories, she also wants them to be about things she cares about. "So, what do I care about?" she said. "Those pushed aside, abused or neglected or rejected by society, be they man or animal."

"I was driving along one summer evening and I glanced up at the sky and saw ice cream clouds skittering by," she told me. "In my mind’s eye, I saw May Binton—a fictitious character, who popped into my head already named—also skittering by, Colonel Burrows in close pursuit, other ideas of exercise on the lawn than aerobics, judging by the glint in his eye… and that was it, the seed was sown and The Madness of Celia Summers was born. Then came the labour. I wrote and wrote. Although I knew I wanted to write about older people in all their rich eccentricity, Celia Summers was my main character, an intrepid mother of two, who cared about old people, too, or elderly independents, as she preferred to call them…"

She stopped writing, though, at around three chapters ("the three chapters one is permitted to submit"). "I didn’t want to," she said, "but I simply couldn’t write any more. These characters meant so much to me, I couldn’t write them only to grieve at the loss of them when they were rejected. I might have stopped writing altogether, but a small publisher here said they’d like to see the whole thing, so I off I went again. Sadly, the publisher didn’t take it. On this occasion, I wasn’t angry or frustrated, because I knew it was really too commercial for them, and they did give me some referrals. Anyway, to cut a long story short, I saw an article featuring The Wild Rose Press in Writers News, sent it to them first…and here I am!"
Posted by Long and Short Reviews at 7:40 AM

It is always nice to delve into the crazy schedule of another author LOL!

Thank you for mentioning my little ebook on promotion which can be found on my blog - I'm so very glad it has been beneficial to you.

Good luck and God's Blessings to you and ALL here at LASR.
PamT