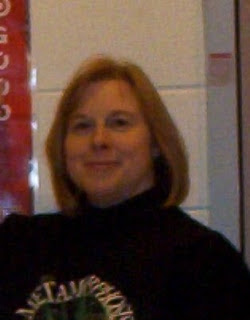 The Long and the Short of It is very excited to welcome Kara Lynn Russell, author of the Orchard Hill Series. Orchard Hill is a small town in Wisconsin where Pansy Parker and Misty Green, two rival matchmakers live. Each thinks she is the best at creating couples. One year they decide to keep track of all their matches and whoever has the most at the end of the year will be considered (at least between the two of them) as the best matchmaker.

The newest installment in this series, "Keeping Faith," is scheduled to come out on Memorial Day. I asked Kara to tell us a little bit about it.

Keeping Faith, the next installment in the Orchard Hill series will tell the story of school secretary Faith and elementary principal, Andrew. They’ve been working together for years and Faith’s been in love with him for most of that time. Andrew’s totally clueless until she decides to quit and won’t tell him why. Then he discovers not only that Faith loves him, but also that he’s been denying his own feelings about her. Of course matchmaker Misty Green gives them just the push they need to get things started.

A series like this has got to be a big undertaking. "It’s very challenging and satisfying," she said. "It’s also a lot of work and there are days when I think I’m insane for pitching it to my editor. But by the end of the year, I’ll have written more than 165,000 words, which will be quite an accomplishment in itself."

I'll say it is! I asked Kara what got her interested in writing. "I don't remember ever not being interested in making up stories and writing them down," she told me. "One of my earliest memories is of creating comic books with my brother."

Kara grew up, with her brother, on a dairy farm in Wisconsin and has recently moved back to her small home town where, once again, she has to get up at 5:30 in the morning to get the day started. She doesn't mind getting up early in the morning, though, because she uses that time for herself, before the morning chaos of getting everyone else moving starts. "I use that time to write," she said.

Kara has several books and stories published, so I asked her what advice she would give to a writer just starting out. "Persevere," she said, "in writing, in learning the craft and eventually, in submitting. I've found the writing community in general and particularly the romance writing community to be very supportive and helpful."

She also had a second word of advice. "Learn to revise what you write. I used to hate that part of writing. I took a big step forward in my writing journey when I finally embraced the need to revise. Now I see it like this –the first draft is just setting down the clay on the wheel. Through revision you create the piece you envisioned."It' s always interesting to me how different authors develop their stories. For some, it's all about the characters and the situations they find themselves in. For others, like Kara, the idea for a plot comes first.

She told me she used to have several types of character worksheets. "The ones," she said, "that have you list everything from traumatic childhood events to preferred underwear type. I always hated filling those out. Lately I've been keeping character journals. I really enjoy letting the characters tell me about themselves. It's still a good idea to keep a list of things like eye color and age, but you can just add to it whenever your character tells you something like that."

She also admits to being an outliner, but adds, "This seems strange because my story never comes out looking like the outline and, in longer works, I usually have to stop once or twice and re-do the outline because my story has strayed way away from it. But I find I can't start if I don't at least have a 'map' of where I want to go."

I asked Kara what authors have most influenced her writing and she told me the answer could change depending on the project she's working on or even what day it is, because there are so many writers she admires and who have influenced her writing. However, she did tell me about three writers who are on her list.

One of the authors that I admire most is L. Frank Baum, who wrote The Wizard of Oz. (And if you’ve only seen the MGM musical of this story, you really need to read the book.) His purpose in writing children’s fantasy was to create a truly American fairy tale. He was a free thinker who had many careers including actor, playwright, store owner, newspaper editor, China salesman, and pioneer in the silent film industry. His writing provided his family with an income after a heart problem prevented him from pursuing more active work.

The second author I’d like to mention is Lynn Cote, an inspirational romance author. I read her first book and was delighted when I found it was set in an area close to my home town. It was exciting to realize that I could write “what I know” and have someone be interested in publishing it.

Finally I have to say that Jane Austen is a great influence. She is another author who wrote “what she knew” and made the ordinary absolutely magical. I love the way she created families and communities. I try to do the same in my stories.

Many people, when journaling find their "inner editor" is turned off only when they write quickly and without really thinking about how they write. Kara shared with me that she's quite the opposite. "In college, a professor started me on the habit of keeping a notebook and writing in it every day...When I wrote slowly and concentrated on the way I formed my letters instead of the way I arranged my words, it was easier to write without judging. As a result I have a distinctive way of forming my letters."

She also admitted to me she cries a lot during movies. "I tend to over-empathize with the characters. My kids love to tease me about it. They're always watching me at the sad parts to see if I'm going to cry. Usually I do."

For a bit of trivia about Kara: a saying she uses a lot is "She doesn't know if she's afoot or on horseback." She got this saying from her grandmother describing a confused person and, she said, "it's always made me laugh."

You can also visit her at her website or, to find out more about Orchard Hill, visit http://orchardhill.blogspot.com/
Posted by Long and Short Reviews at 9:34 AM