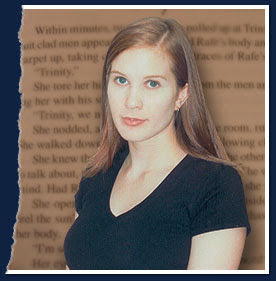 The Long and the Short of It is excited to have Cynthia Eden visiting with us today. Cynthia has a new paranormal romance being released by Kensington Brava this week. She's also had novellas published by Avon Red and Red Sage Publishing, as well as two other paranormal romances with ImaJinn Books.

Cynthia told me she a very active imagination. In fact, she shared with me that her imagination is too strong for total darkness, so she always sleep with the light on. "I’ll admit this without shame," she said. "I can imagine anything when I hear the creak of a floorboard or the drip of a faucet. Better to just have a sliver of light spilling in from the closet or bathroom—that way, I won’t imagine a serial killer (wearing a hockey mask) in my bedroom."

Cynthia has a couple of interesting things she does when she has a case of writers block. One thing she does is keep an "idea file" going. Whenever she gets a new idea for a story, she opens her "idea file" and types it in. Then, when she gets stuck on her current WIP, all she has to do is open the file and work on something new for a bit. "Usually just starting a new tale will free my mind—and allow me to get the creative juices flowing again," she said.

I really liked her second way of overcoming writers block. "I also take a lot of walks. I often talk to myself as I walk—hashing out scenes and trying to figure out exactly what should happen next in my novel." She doesn't get many strange looks when she does this. And for a very good reason. "I have my two-year-old with me," she said, "so it looks like I’m talking to him instead of, ahem, myself." I think she plans it that way :-)

Several things, in her estimation, go into good writing. These elements are strong characters, great chemistry between those characters, fast pacing, a gripping plot, and believable dialogue.

Every writer has a different part of their book they find difficult to write. Cynthia shared with me that the hardest part for her is always the beginning. "Usually, I will write about three different beginnings for my stories," she told me. "I’ll experiment until I find the one that seems to flow the best for me."

Cynthia enjoys snorkeling, thunderstorms (she told me she loves "listening to the thunder and hearing the roar fill the sky. Perfect inspiration"), funny movies (if you catch her crying during a movie, she said, "I’m laughing so hard the tears trickle down my face. I try to avoid movies that I know will be sad—I figure life is sad enough"), starry nights, and reading great romances.

Her latest book, Hotter After Midnight is being released this week and we are giving away an autographed copy of it (you can also read our review of it here). Make sure you go to our contest page and play along. I asked Cynthia to tell me a little bit about this intriguing book. "In Hotter After Midnight," she said, "my heroine, Dr. Emily Drake, is a psychologist who only treats paranormal patients and Colin Gyth, the hero—he’s a police detective (and a wolf shifter). The two of them become paired up while working a murder investigation. Since Emily’s specialty is the paranormal, she is the perfect profiler for a supernatural case. But, as the danger mounts, Emily and Colin find a connection that neither anticipated, and a passion they can’t deny."

Visit Cyntha at her website: www.cynthiaeden.com .
Posted by Long and Short Reviews at 7:04 AM

This is a lovely interview. I feel now that I really know you, and you are charming. I know what you mean by an over active imagination. I don't sleep with a light on, but I see serial killers or terrorist everywhere I go! That's why I write romantic suspense.