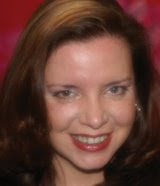 The Long and the Short of It is very excited to welcome Lynsay Sands, New York Times bestselling author of the Argeneau Vampire series. Lynsay's first novel was published in 1997 and since then she's written more than 34 books and anthologies.
She doesn't write only about vampires, though. Her romantic comedies span three genres—historical, contemporary, and paranormal. She told me about one of her latest books, The Accidental Vampire, which came out the end of last year (our review of it is here).

" I had loads of fun with that book," she said. "The characters and situation were such fun. In the story, fifty-seven year old Elvi Black went on vacation in Mexico with her friend Mabel only to wake up one morning looking twenty-five and craving blood. Mabel realizes Elvi has become a vampire but isn’t willing to give up a lifelong friendship over a little thing like that. She helps her get home and then informs their small town of what has happened and gets everyone on board to help Elvi with her little 'issue.' With no other source to tell them how to do that," she continued, "they base their 'help' on movies and books like Dracula. It works well enough, however, and things are going swimmingly until Mabel decides Elvi needs a mate, a vampire like herself to share the future with. And how do you find a vampire mate for a friend? They put an ad in the personal columns of the newspaper in the city. Unfortunately, that ad draws the attention and wrath of the immortal’s council and Victor Argeneau is sent to Elvi’s small town to hunt her down and bring her in for judgment. But a little glitch to this plan crops up when Victor arrives to find that Elvi is his lifemate. That is then compounded by the fact that someone is trying end Elvi’s immortal life early and Victor has to catch the would-be killer and figure out how to appease the council, all while dealing with the town full of protective friends as well as the other suitors for Elvi’s hand that answered the ad. I really enjoyed this story, perhaps partially because I placed it in my own home and the town where I live. I even put my neighbors in the story. It was quite fun to write."
After The Accidental Vampire, Lynsay has come out with two other books in the Argeneau series, Vampires are Forever (our review of this is here), and coming out this month, Vampire Interrupted (our review of this is here). By the way, if you want to read the Argeneau series in order, Lynsay recommends you follow the book number, not the publishing date, as they were published out of order.

I asked Lynsay what she wanted to be when she grew up. "I’m really not very good at the growing up thing," she said. "I don’t feel any different inside now than I did when I was sixteen. I think that’s a common thing. At least it is in my family. About ten years ago I asked my gran when I’d start to feel grown up and like an adult and she said she didn’t know, she was still waiting on that and still felt 16 inside too. At any rate, I always wanted to be a writer, and still do. Hopefully I always will."

Most of her writing takes place in a sunroom. "It has everything," she explained, " a tea kettle, coffee pot, tv, dvd player, wicker furniture . . . About the only thing it doesn’t have is a desk. That’s downstairs. Instead I use my portable and write on an adjustable table and—as of recently—my desk chair is a recumbent bike. I spend so much time writing lately that my health was beginning to suffer (as in, I’m getting a huge butt). I decided I had to find some way to fit some exercise in while working so now ride the bike while tapping away on my keyboard."

Personally, I think that's an excellent idea. I may just have to steal if from her.

Another idea I might swipe is what she does when she suffers writers block. "I head to the coffee shop," she said. "For some reason, writing by hand in a coffee shop loosens up the ideas and lets them start flowing again."

Lynsay also told me she's a night person, which makes sense given her proclivity for the creatures of the night. "I sleep the day away," she said, "and write evenings and through most of the night." Hmmm…on her website, she jokes about being a vampire and writing the history of her family. Maybe there's more truth in that than she wants to admit.

In closing, I asked Lynsay what advice she had for new writers. "Write what you love. If you love it, the reader probably will too," she said. "And try to remember to show and not tell. That’s a hard one I even sometimes forget despite all the books I’ve written, but it’s important. Writing the character’s emotions out as thoughts they're having just slows down the pace of the story and can be boring, whereas showing it in their actions and words is more interesting and keeps up the pace."

Lynsay, thank you so much for being with us. Make sure you visit her at her website where you will find some fun things for her readers.
Posted by Long and Short Reviews at 7:33 PM

Great interview!! Lynsay Sands is one of my favorite writers.

But Pickles and PB?? I dont know about that. But hey I will try just about anything once.