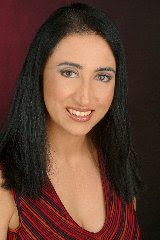 The Long and the Short of It is very excited to welcome Nicola Marsh this week.

Nicola is a full-time author, but she worked as a physiotherapist for thirteen years and used to say, "One day, I'm going to write a book." Well, she got tired of saying that and finally did it. In 2001 she started writing and hasn't slowed down. She currently has fifteen books published for Harlequin Romance and Presents series.

Nicola has a full-time day job in her native Australia... raising her family... so she doesn't get started on her writing until the kids go down to sleep. She told me, "I have a young family (a preschooler and a 7 month old baby) so my writing is confined to night. My working ‘day’ starts at 8.30pm and I usually write for 2 hours straight. Luckily I’m a fast writer, so I try to cram as many words as I can into that time. I spend about half an hour every morning checking emails, updating blogs, etc."

With two small children, I'm sure multi-tasking is a priority in her life. "Being a busy mum and an author with 4 deadlines a year to meet, I have to multitask," she assured me. "An example? Dropping kidlet 1 off at kinder morning, doing grocery shopping in the 2 hour limit while he’s there, then writing sex scene on Alphasmart at the shopping centre while rocking pram with foot to keep baby happy, drinking a milkshake at the same time while fending off curious glances from people trying to read over my shoulder. Now that’s multitasking!"

Nicola has been forced into being a morning person because her kids get up early, but she told me she's always considered herself a night person. She loves staying up late reading, but these days she finds herself mostly typing away at the keyboard.

And, that's necessary. She told me the best advice she could give a new writer is simple. "Write, write, then write some more. The only way to develop your voice is to write, and the more you write the easier it becomes (trust me!) Also, know your market. Read widely for the market you’re targeting, it’s great research and will save you loads of wasted time later when submitting."

She has obviously taken her own advice to heart, since she has written twenty different books. Currently Nicola writes for two separate lines: Harlequin Romance and Presents(known in Australia as Modern Heat). She's currently editing her fifth novel for Modern Heat and I asked her to tell us about it.

"The hero is an archaeologist who has taken over as CEO of Melbourne Museum," she said, "and the heroine is a metal sculptor with a shoe fetish. The sparks are well and truly flying! I report regularly on Aidan and Beth’s progress on my blog.

Out of twenty books, it must be hard to pick a favorite, but I asked Nic to give it a try anyway.
"I’d have to say my February release, Purchased for Pleasure (Harlequin Presents), featuring a Navy SEAL hero and a magazine editor heroine going head to head is my fave," she admitted. "They have a past (a brief engagement when they were young) and now Kate ‘buy’s Tyler at a male auction and he’s hers for a week. Loads of opportunity for heat!

"Closely followed by Mistress to a Tycoon (Harlequin Presents out in March) featuring an artist heroine with a passion for vintage clothes and a savvy property developer. Both books feature alpha heroes with heroines who more than stand up to the guys!"

Nicola's latest book, which we are offering in our weekly contest along with Purchased for Pleasure, is Executive Mother-To-Be. It features "an entrepreneur dealing with loss issues and a feisty TV exec producer totally focussed on her career and who has never wanted kids. So imagine what happens when Kristen Lewis discovers she’s pregnant…to her new boss! This book will be released in February in the UK & US." A lot of room in that scenario for problems!
Be sure and check out Nic's website and her blog.
Posted by Long and Short Reviews at 1:56 PM