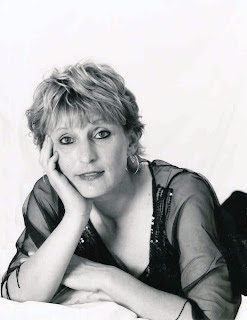 The Long and the Short of It is pleased to have M. Jean Pike, author of Heatherfield, a paranormal romance that has already garnered some great reviews, even though it hadn't been released yet.
Jean told me she's had an ongoing love affair with words since she could remember, but she knows exactly the moment she got serious about her writing. "I was in the third grade," she said, grinning. "A teacher assigned a short story project, and when I saw that 'A' at the top of the page I was hooked." She was an early pioneer in the self-published arena, she told me. "[I published] a series of mysteries centered around "Mack the Mysterious Mutt,' a large, pink Labrador retriever who bore a striking resemblance to Clifford the Big Red Dog, except that he had magical powers (go figure). I put the stories together with yarn and construction paper covers and created my own cover art with magic markers. The series was a huge hit, garnering five-star reviews from my mother and grandmother."

Even with the early great reviews, it wasn't until Jean got paid for her work that she considered herself a 'real' writer. "When my first essay appeared in a small, local journal and I saw my byline at the top of the page," she said, "I actually cried. Days later I received a clipping of the article and a check for ten dollars, which I framed."

She shared with me that since then she's published over 200 short stories and articles and some of those have paid as much as $1000. "No check," she assured me, "was ever, or ever will be, as thrilling as my first."

Jean has a fascination for abandoned houses and, if she comes across one that truly intrigues her, she always tries to take a photograph of it. She told me about one special abandoned house. "On a Sunday drive, years ago, I came across a fabulous old house falling to ruins on a deserted country road. When I got the photo developed," she said, "there seemed to be a shadow in an upstairs window. I couldn't quite get away from that photo. I kept asking myself who was in the window? Why that particular window? What else was in the room? From those questions grew the story of Mary, a young girl who died in childbirth in the 1950's and haunted her baby's nursery for the next decade." This story became Jean's first novel, The Winds of Autumn.

Jean currently has three published novels: The Winds of Autumn, Waiting for the Rain, and Heatherfield. She also has one in progress. I asked her which was her favorite. She told me, "Like any proud mother, I love my 'children' equally."

I did manage to get her to tell us more about her latest one, though. Here's what she has to say about the newest one out, Heatherfield.

We all have our favorite books -- stories we return to again and again. Stories where we feel so in tune with the setting that we are utterly drawn in, where we fall so in love with the hero that we long to step between the pages and become a part of his world. But what if you really did get pulled into a novel, and then discovered you couldn’t get out? What if, fearing institutionalization, you pretended you couldn’t remember who you were, and then discovered you really couldn’t? What if you fell so desperately in love with the hero that when the way out was revealed you discovered you didn’t want to leave? That’s what Heatherfield is about.

I asked Jean if she were a morning or night person... when was she most productive? She told me, "Actually I am neither a night or morning person. I feel most energetic and creative in the early afternoon hours, between noon and three o’clock."

Another fun question I like to ask is the author's favorite pizza and Jean's sounds so yummy, I'm going to have to try it! Her favorite is "deep dish, extra cheese, loaded with black olives." I'm salivating as I think about it!

Once, when I was in junior high school, a friend and I thought it would be fun to call someone and pose as a radio dj from one of the local stations, telling the person they’d won a fabulous prize. We chose a number at random, stupidly using our own town’s three-digit prefix, and ended up calling our math teacher. This was in the days before caller ID, but despite our very cleverly disguised voices, she knew who was calling. How embarrassed were we when she made an announcement in class the following day about the ‘fabulous prize’ she’d won!

I'm willing to bet that cured them.

Make sure you stop by Jean's website.
Posted by Long and Short Reviews at 1:08 PM